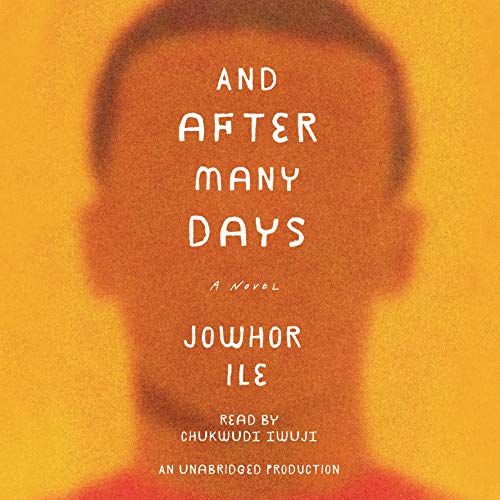 And After Many Days

An unforgettable debut novel about a boy who goes missing, a family that is torn apart, and a nation on the brink.

During the rainy season of 1995, in the bustling town of Port Harcourt, Nigeria, one family's life is disrupted by the sudden disappearance of 17-year-old Paul Utu, beloved brother and son. As they grapple with the sudden loss of their darling boy, they embark on a painful and moving journey of immense power that changes their lives forever and shatters the fragile ecosystem of their once ordered family.

Ajie, the youngest sibling, is burdened with the guilt of having seen Paul last and convinced that his vanished brother was betrayed long ago. But his search for the truth uncovers hidden family secrets and reawakens old, long-forgotten ghosts as rumours of police brutality, oil shortages, and frenzied student protests serve as a backdrop to his pursuit.

In a tale that moves seamlessly back and forth through time, Ajie relives a trip to the family's ancestral village where, together, he and his family listen to the myths of how their people settled there, while the villagers argue over the mysterious Company, who found oil on their land and will do anything to guarantee support. As the story builds toward its stunning conclusion, it becomes clear that only once past and present come to a crossroads will Ajie and his family finally find the answers they have been searching for.

And After Many Days introduces Ile's spellbinding ability to tightly weave together personal and political loss until, inevitably, the two threads become nearly indistinguishable. It is a masterful story of childhood, of the delicate, complex balance between the powerful and the powerless, and a searing portrait of a community as the old order gives way to the new.

"One rarely finds 'page-turner' and 'poetry' in the same sentence, but And After Many Days is a rarity indeed. At once calm, collected, lyrical and heartbreaking, Ile's debut is many things: an achingly tender portrait of family life, a brilliantly executed whodunnit, a searing critique of Nigerian politics, a meditation on love. I couldn't put it down and was forever changed when I did. The Utu family will stay with me always." (Taiye Selasi, author of Ghana Must Go)
" And After Many Days is a brilliant novel that paints a vivid picture of a changing society, effortlessly shifting between moments and years, all while keeping us grounded in a growing boy's understanding of himself and the surrounding world. It is a book that offers profound insight into a country that headlines can never capture. A wonderful debut." (Uzodinma Iweala, author of Beasts of No Nation)
"Jowhor Ile is rooted in the lush mindscape of the Niger delta. For here is a writer whose rare insight is evident not only through the voice he breathes into his characters but also in how deep he digs to tap the wellspring of their history. Bumps of pleasure and flashes of recognition lie in ambush on page after page of this smooth-singing, hard-hitting novel - a tender and lucid accomplishment by a distinctive talent." (A. Igoni Barrett, author of Love Is Power, Or Something Like That)

Das sagen andere Hörer zu And After Many Days