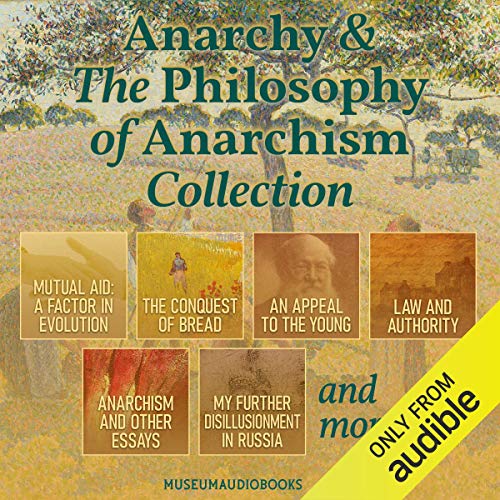 Anarchy & the Philosophy of Anarchism Collection

Anarchism claims that there's no need for a state and that it would be better to have a society without central government. Anarchists dislike the authority of the state, but the dream of the stateless society is not a simple matter.

The Anarchy & The Philosophy of Anarchism Collection includes:

Book one: The 1902 essay collection Mutual Aid: A Factor in Evolution by the Russian naturalist and anarchist philosopher Peter Kropotkin explores the role of mutually beneficial cooperation and reciprocity in the animal kingdom and human societies. It is an argument against theories of social Darwinism that emphasize competition and survival of the fittest and against the romantic views of writers such as Jean-Jacques Rousseau who thought that cooperation was motivated by universal love.

Book two: The Conquest of Bread is an 1892 book by the Russian anarcho-communist Peter Kropotkin. It first appeared as a series of articles in the French anarchist journal Le Révolté. Kropotkin points out what he considers to be the defects of the economic systems of feudalism and capitalism and why he believes they thrive on and maintain poverty and scarcity.

Book three: An Appeal to the Young is a passionate tract by Peter Kropotkin that was translated from Russian in 1884 by HM Hyndman. The next year it was published in San Francisco with the title To Young People by the International Workingman’s Association (IWMA) in a translation by Marie LeCompte. The pamphlet is imbued with a fierce morality and by times earnest, scathing, condemnatory, and passionate.

Book four: Law and Authority, by Kropotkin, advocates a communist society free from central government. A classic statement of anarchist thought, it considers prisons as “schools of crime” and presents an anarchist critique of the law and the criminal justice system. The text is much easier to understand than for example the works of Bakunin, and the argument is clearly stated for easy digestion. Kropotkin's argument is hard to dispute despite it being so simple.

Book five: Anarchism and Other Essays is a 1910 collection of essays outlining Emma Goldman's anarchist views on various topics, most notably the oppression of women and perceived shortcomings of first-wave feminism. It also sets out her views on prisons, political violence, sexuality, religion, nationalism, and art theory for a fascinating look into revolutionary issues at the turn of the century.

Book six: My Further Disillusionment in Russia, in which Emma Goldman tells of her visit to Russia in 1919 where she witnessed the aftermath of the Revolution firsthand. Disgusted by the actions of the communist dictatorship, she left the country in 1921 and reported her eyewitness accounts in two books - My Disillusionment in Russia and My Further Disillusionment in Russia. She exposed the political harassment and forced labor inflicted on the people, the rampant opportunism in the Soviet government, the persecution of anarchists and others, and the government's use of deportation as a political weapon. She also describes the type of visitors who came to "study the Revolution". There were the naïve idealists, the journalists who were wined and dined by the communists and spread propaganda afterward, and a third type that became agents of the ruling party.