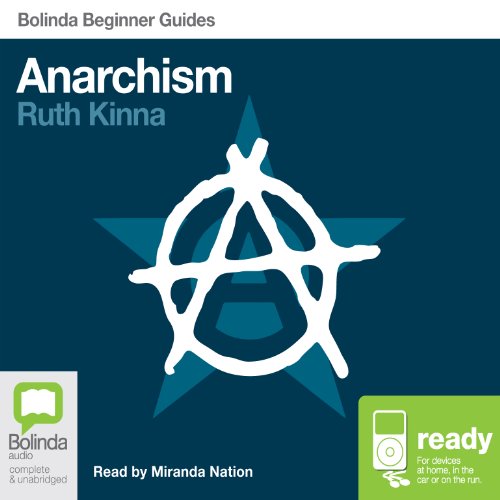 Before encircled red As began marking backpacks across the globe, the idea of anarchy was being debated by some of history's greatest minds. This primer to the subject of anarchism, part of Bolinda's Beginner Guides, traces the history of this seductive, unlikely idea as it has barnacled itself to the visions of religious dreamers, Marxist radicals, and armchair philosophers throughout history. Rousseau, Hobbes, Marx, and others all throw out tempting and often contradictory images for what anarchy might mean in practice. Author Ruth Kinna untangles these knots and shows what the idea of anarchy has meant to some of humanity's most influential thinkers and at its most crucial junctures. Narrator Miranda Nations conveys these ideas with a clarity and accessibility.

An investigation of a divisive and often misunderstood ideology. What do anarchists stand for? In this clear and penetrating study, Ruth Kinna goes directly to the heart of this controversial ideology, explaining the influences that have shaped anarchism and the different tactics and strategies that have been used by anarchists throughout history to achieve their ends.

Kinna covers themes both historical and acutely contemporary, including: Could anarchy ever really be a viable alternative to the state? Can anarchist ideals ever be consistent with the justification of violence? How has anarchism influenced the anti-globalisation movement?