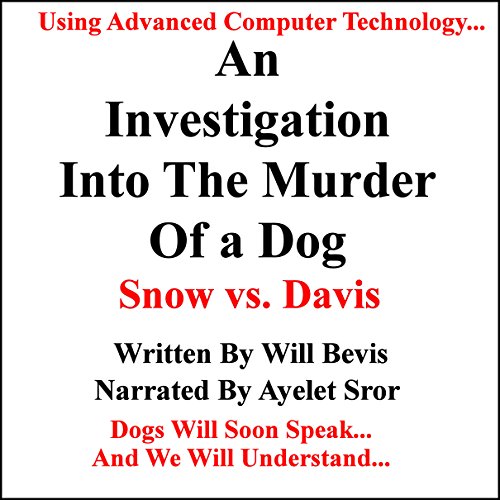 An Investigation into the Murder of a Dog: Snow vs. Davis

Will Bevis is a prolific writer of short, sometimes very controversial slice-of-life stories, articles, essays, and memoirs that make you feel you are right there, experiencing the story as it happens. His best known story is the Top One Hundred Free for Kindle story "The Killing of Train-Man Brown". He has written more than one hundred stories, including, "Then Her Wig Fell Off", "Let the Dog Drive", "Blackbird", "Supply and Demand", and many, many others. Many are also available as audiobooks. His first complete novel, Boogie and Bill: A Black Man's Life with the White Devil, is soon to be released.

About this short story:

In only the second year after the hardware/software breakthrough that allowed human beings and dogs to communicate finally, an aging shih tzu came into the local office of Dog/Human Relations and requested to be placed in protective custody so an investigation into the murder of a dog he once knew could be undertaken.

After listening to his story, the three-person, two-dog panel decided to honor the shih tzu's request, placed him in protective custody, and summoned a grand jury to decide if there was enough cause to proceed with criminal charges against the dead canine's owner.

The enclosed is the transcript of that grand jury, its proceedings, and recommendations.

How will the grand jury rule in this matter?

Das sagen andere Hörer zu An Investigation into the Murder of a Dog: Snow vs. Davis