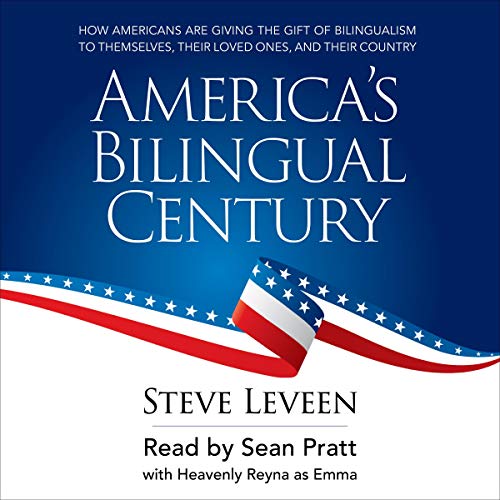 Scientists have shown bilingualism to be brain-changing. It can also be life-changing.

In America's Bilingual Century, author Steve Leveen takes you on a journey of reinvention - of yourself, your children, and the country - that takes place when we embrace bilingualism. Based on a decade of research and hundreds of interviews with experts and successful bilinguals, Steve found that a new America is emerging: One where more and more people are speaking English and another language.

Steve is one of them. He has "adopted" Spanish as his second language. Learning it later in his life gave him both insight and empathy.

He offers both in this audiobook, along with loads of practical advice on how you, too, can become part of this 21st-century America.

For adults who've never mastered a second language and believe they never can, Steve debunks myths, reveals the good news on improved teaching methods, and shares some of the learning techniques that work well for adults.

For parents, he shows the decisive advantage that bilingual children have - not just in language class, but with all their learning. He also takes parents on a tantalizing tour of dual language immersion programs, which may well be the future of education in America.

For every American, he takes us back into our history, exploring why a country that contained many languages at various periods is ready to become that country again - but better. Then he re-imagines for us how an America of flourishing bilingualism might look, sound, and feel.

If bilingualism isn't yet in your future, it just might be after listening to this thought-provoking, eloquent, and heartwarming audiobook.