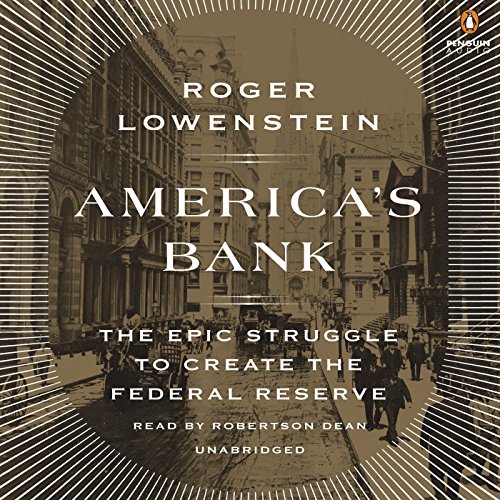 Until the election of Woodrow Wilson the United States - alone among developed nations - lacked a central bank. Ever since the Revolutionary War, Americans had desperately feared the consequences of centralizing the nation's finances under government control. However, in the aftermath of a disastrous financial panic, Congress was persuaded - by a confluence of populist unrest, widespread mistrust of bankers, ideological divisions, and secretive lobbying - to approve the landmark 1913 Federal Reserve Act.

Writing in a rich and untapped historical vein, Roger Lowenstein - acclaimed financial journalist and best-selling author of When Genius Failed and The End of Wall Street - reveals the drama-filled, unlikely story of how America created the Federal Reserve, thereby taking its first steps onto the world stage as a global financial power. America's Bank showcases Lowenstein at his very finest: illuminating complex financial and political issues with striking clarity, infusing the debates of our past with all the gripping immediacy of today, and painting unforgettable portraits of Gilded Age bankers, presidents, and politicians.

With America's Bank, Lowenstein focuses on the four men at the heart of the drama to create the Federal Reserve. These are Paul Warburg, a refined, German-born financier, recently relocated to New York, who was horrified at America's primitive finances; Rhode Island's Nelson W. Aldrich, the reigning power broker in the US Senate and an archetypal Gilded Age legislator; Carter Glass, the ambitious but little-known Virginia congressman who chaired the House Banking and Currency Committee at a crucial moment of political transition; and, of course, President Woodrow Wilson....