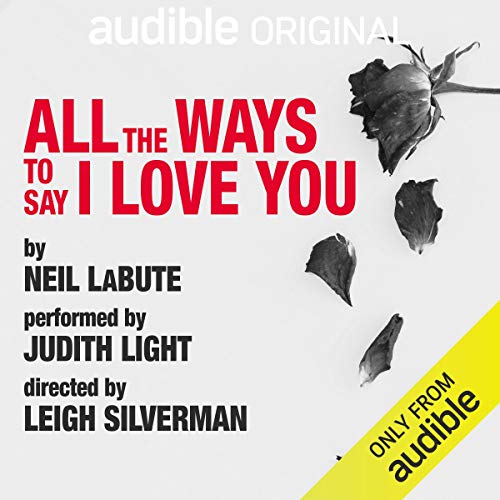 All the Ways to Say I Love You

All the Ways to Say I Love You

All the Ways to Say I Love You by Neil LaBute, directed by Leigh Silverman, is a thoughtful, psychological solo play centered around the character Faye Johnson, performed by multi-award-winning actress Judith Light (Transparent, American Crime Story, Who's the Boss?). Reflecting on an event from her past, Johnson confronts the defining question of her life: What is the weight of a lie?

All the Ways to Say I Love You received its World Premiere production at the MCC Theater in September of 2016. MCC is under the leadership of Artistic Directors Robert Lupone, Bernard Telsey, William Cantler, and Executive Director Blake West.

"[All the Ways to Say I Love You] is a throwback to a favorite form of Mr. LaBute's earlier days: the one-act monologue in which an ostensibly sunny soul strips down to dark shadows." (The New York Times)

"Leave it to Neil LaBute to find a heretofore unknown...way to express one's love...As anyone who knows LaBute's work can expect, a creeping primal darkness ensnares us in what appears to be an ordinary life." (Newsday)

"[Judith Light] vividly renders her character's complex feeling of shame, regret, and also unabashed joy...The anguish that Mrs. Johnson feels is palpable, and it's impossible not to sympathize with her." (Hollywood Reporter)

"The emotionally ravaged, unexpectedly sensuous Mrs. Johnson is a departure from the rueful, acerbic quipsters she has perfect onstage, and Ms. Light brings a vibrant, thirsty eroticism to the part." (The New York Times)