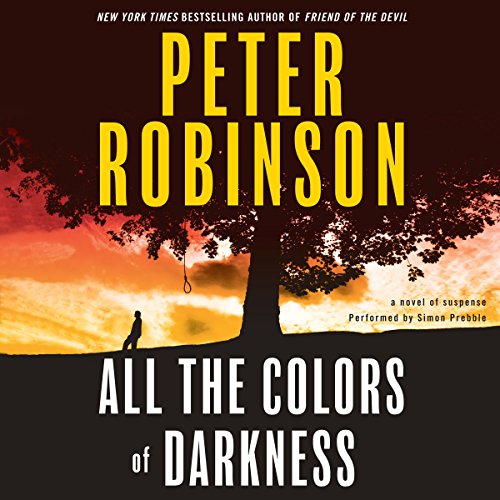 All the Colors of Darkness

Detectives Alan Banks and Annie Cabbot return in another electrifying novel from the acclaimed award-winning author of the New York Times best seller Friend of the Devil.

When the body of a man is discovered hanging from a tree in the woods near Eastvale, all signs point toward suicide. At least that's what it initially looks like to Detective Inspector Annie Cabbot.

The man is soon identified as Mark Hardcastle, the set and costume designer for the local amateur theater company. Mark was successful and well liked in the community, but enough remains mysterious about his background that suicide isn't completely out of the question. But when Mark's older and wealthier lover is discovered bludgeoned to death in his home, Annie begins to think differently. Could it have been a crime of passion, or did overwhelming grief lead to a man taking his own life? Increasingly confounded, she calls in the vacationing Chief Inspector Alan Banks, even if it means prying him away from his new girlfriend.

Once on the investigation, Banks finds himself plunged into a case where nothing is as it seems. More and more, his own words about the victim's latest production, Othello, are coming back to haunt him, for "jealousy, betrayal, envy, ambition, greed, lust, revenge: all the colors of darkness" are quickly becoming his world as well.

Das sagen andere Hörer zu All the Colors of Darkness