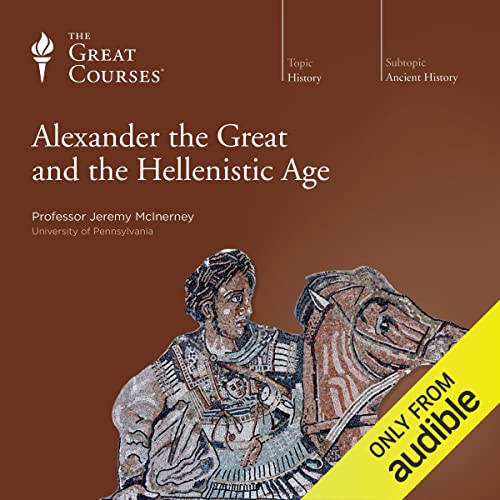 Alexander the Great and the Hellenistic Age

In the opening lectures, you'll explore the enigma of Alexander, son of a brilliant father, yet always at odds with the man whom he succeeded. You'll trace his early campaigns against the Persians and follow him to Egypt, where he was acclaimed as the son of god. You'll then look at his career after this and find in him a blend of greatness and madness as he strove to replace the Persian empire of the Achaemenid dynasty with a new, mixed ruling class of Macedonians and Persians.

From there, you'll delve into the catastrophic period after Alexander's death in 323 B.C., which ushered in a period of catastrophic change as ambitious warlords carved up Alexander's realm into their own separate empires. You'll learn about each of the three kingdoms that resulted: Ptolemaic Egypt, Seleucid Syria, and the Attalid Empire in Asia Minor. Just as important to these lectures are the in-depth discussions of the bounties of Hellenistic culture, which contributed landmark ideas in everything from philosophy (which became more academic), art and architecture (with its excessive, naked emotions), and religion (especially the growing popularity of cult movements). Taken all together, these lectures are an engrossing and riveting journey into ancient history-and the life and times of the man who left an indelible mark on everything that would come after.