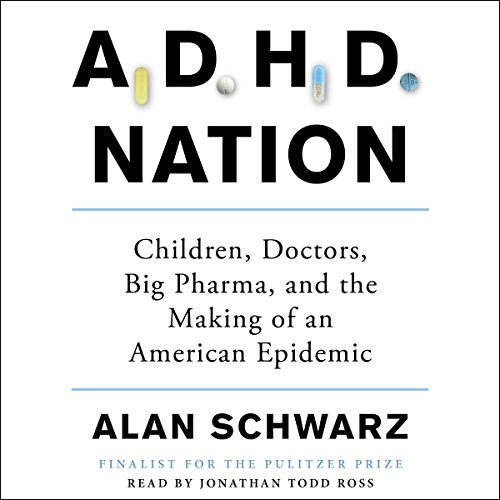 A groundbreaking and definitive account of the widespread misdiagnosis of attention deficit hyperactivity disorder and its serious effects on children, adults, and society.

More than one in seven American children are getting diagnosed with attention deficit hyperactivity disorder (ADHD) - three times what experts have said is appropriate, making it one of the most mishandled and debated conditions in medicine. The numbers are rising every year. Now doctors and Big Pharma are targeting adults and the rest of the world to get diagnosed with ADHD and take medications that will "transform their lives".

In ADHD Nation, Alan Schwarz takes listeners behind the scenes to show the roots and rise of this cultural and medical phenomenon: There's the father of ADHD, Dr. Keith Conners, who spends 50 years pioneering the disorder and use of drugs like Ritalin before realizing his role in what he now calls "a national disaster of dangerous proportions"; a troubled young girl and studious teenage boy who get entangled in the growing ADHD machine and take medications that cause them serious problems; and a pharmaceutical industry that egregiously overpromotes the disorder and earns billions from the mishandling of children (and now adults).

While demonstrating that ADHD is real and can be successfully medicated, Schwarz sounds an alarm and urges America to wake up and address this growing national problem.