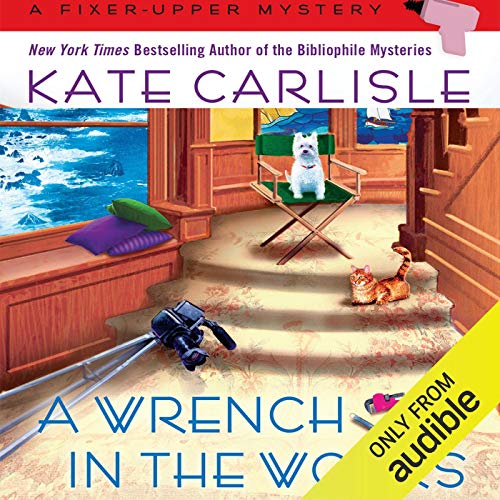 A Wrench in the Works

Contractor Shannon Hammer has to dig through murder suspects in the latest Fixer-Upper Mystery from the New York Times best-selling author of Eaves of Destruction and Once upon a Spine.

Don't miss the Hallmark Movies and Mystery Originals starring Jewel, based on the Fixer-Upper Mystery series!

Shannon Hammer’s younger sister, Chloe, left Lighthouse Cove after high school to make it big in Hollywood. And she did it! Chloe is the cohost of a popular home-repair show on the Home Builders Network. Now, after 10 years, she has returned to their quaint coastal hometown to film several shows featuring her sister, Shannon, along with some special mini-segments on Victorian style and design.

But Shannon quickly realizes that things are not exactly blissful in TV land. Bree, the executive producer of the show, has a knack for stirring up sticky situations, and when she’s found dead, Chloe and the entire crew are under suspicion. Shannon, her thriller-writer boyfriend, Mac, and their crime-solving friends soon unearth the real reason Chloe left home.

Is that 10-year-old secret connected to Bree’s death? And can Shannon track down the real killer before her beloved sister becomes the next victim?

Das sagen andere Hörer zu A Wrench in the Works