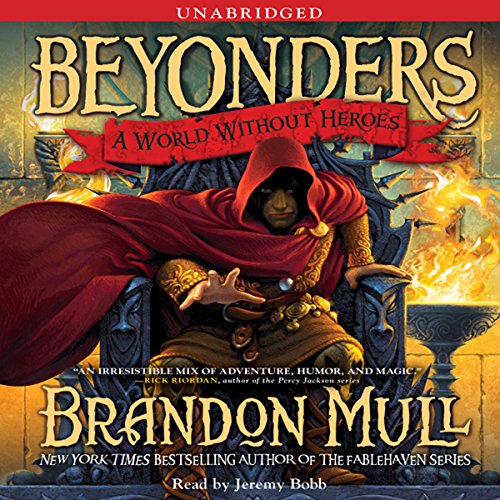 A World Without Heroes

A World Without Heroes

Brandon Mull, best known for his Fablehaven fantasy series, is back with A World Without Heroes, the first in a three-book series called The Beyonders. Mull creates an alternate world, Lyrian, which needs a hero to overturn an evil emperor. Enter Jason, an average 12-year-old Colorado kid, who falls through a hippo’s mouth and ends up in Lyrian and quickly becomes entangled in its intrigue and adventure. Rachel, a gutsy and clever homeschooler, who also unwittingly ends up in Lyrian, joins him in the quest. These two Beyonders (what Lyrians call people from Earth) attempt to find and piece together the syllables that form a secret word that can destroy the evil emperor when uttered in his presence.

Broadway actor and new narrator Jeremy Bobb shines with the varied and numerous characters. He seamlessly switches among the dozens of characters while keeping them distinct and recognizable in the dialogue-heavy scenes. However, Bobb’s performance is too low energy for the material. This flatness emphasizes some stilted writing and undermines the exciting action sequences.

In A World Without Heroes, Mull successfully creates a full, rich fantastical world. In keeping with the fantasy genre, he includes wizards and invents fun creatures, such as displacers, who can remove and reattach body parts. Though the writing is somewhat mediocre and his protagonists not fully developed, the novel is still entertaining. There are several interesting and shocking plot twists and turns that make this better than the average fantasy. Mull knows his audience and the action, humor, and fast pace are perfect for his readership. The content is age-appropriate and, with both male and female protagonists, adults can enjoy listening with their sons and daughters.

A World Without Heroes is a nice addition to the middle school fantasy genre. Mull fans and fantasy fans will love this new series. Listeners who latch onto Bobb’s character interpretation will anxiously await the next Beyonders installment. Julie MacDonald

Jason Walker has often wished his life could be a bit less predictable - until a routine day at the zoo ends with Jason suddenly transporting from the hippo tank to a place unlike anything he's ever seen. In the past, the people of Lyrian welcmoed visitors from the Beyond, but attitudes have changed since the wizard emperor Maldor rose to power. The brave resistors who opposed the emperor have been bought off or broken, leaving a realm where fear and suspicion prevail.

In his search for a way home, Jason meets Rachel, who was also mysteriously drawn to Lyrian from our world. With the help of a few scattered rebels, Jason and Rachel become entangled in a quest to piece together the word of power that can destroy the emperor, and learn that their best hope to find a way home will be to save this world without heroes.