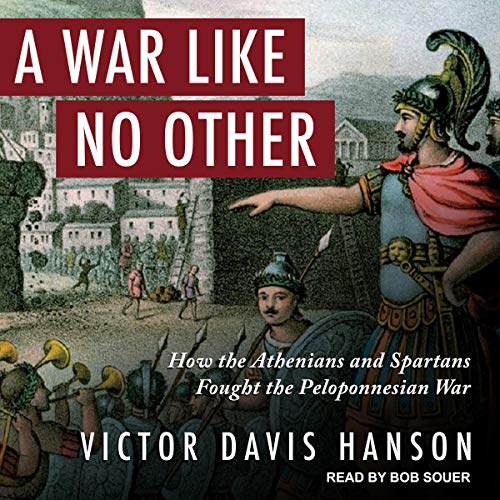 Victor Davis Hanson has given us painstakingly researched and pathbreaking accounts of wars ranging from classical antiquity to the 21st century. Now he juxtaposes an ancient conflict with our most urgent modern concerns to create his most engrossing work to date, A War Like No Other.

Hanson compellingly portrays the ways Athens and Sparta fought on land and sea, in city and countryside, and details their employment of the full scope of conventional and non-conventional tactics, from sieges to targeted assassinations, torture, and terrorism. He also assesses the crucial roles played by warriors such as Pericles and Lysander, artists, among them Aristophanes, and thinkers including Sophocles and Plato.

Hanson's perceptive analysis of events and personalities raises many thought-provoking questions: Were Athens and Sparta like America and Russia, two superpowers battling to the death? Is the Peloponnesian War echoed in the endless, frustrating conflicts of Vietnam, Northern Ireland, and the current Middle East? Or was it more like America's own Civil War, a brutal rift that rent the fabric of a glorious society, or even this century's schism between liberals and conservatives? Hanson daringly brings the facts to life and unearths the often surprising ways in which the past informs the present.

Das sagen andere Hörer zu A War Like No Other