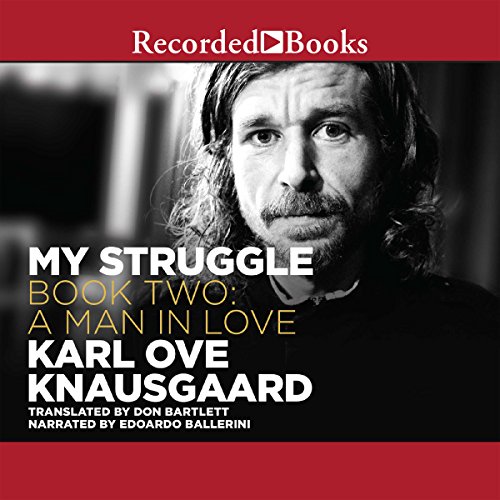 A Man in Love

In the second installment of Karl Ove Knausgaard's monumental six-volume masterpiece, the character Karl Ove Knausgaard moves to Stockholm, where, having left his wife, he leads a solitary existence. He strikes up a deep friendship with another exiled Norwegian, a Nietzschean intellectual and boxing fanatic named Geir. He also tracks down Linda, whom he met at a writers' workshop a few years earlier and who fascinated him deeply.

My Struggle, book two, is at heart a love story - the story of Karl Ove falling in love with his second wife. But the novel also tells other stories: of becoming a father, of the turbulence of family life, of outrageously unsuccessful attempts at a family vacation, of the emotional strain of birthday parties for children, and of the daily frustrations, rhythms, and distractions of city life keeping him from (and filling) his novel. It is a brilliant work that emphatically delivers on the unlikely promise that hundreds of minutes later, listeners will be left breathlessly demanding more.

"[Book two] sears the reader because Knausgaard is a passionate idealist [who] wants to fight the conformity and homogeneity of modern bourgeois existence." (James Wood, The New Yorker)