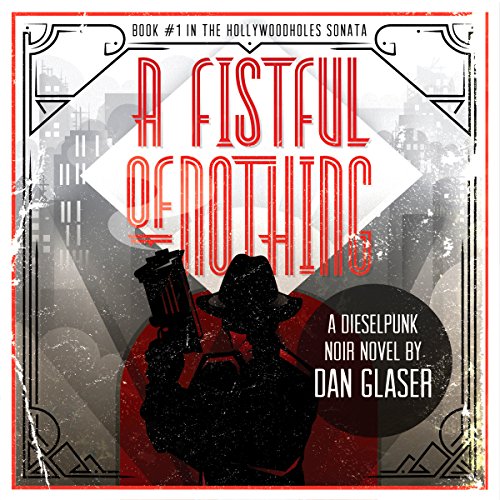 A Fistful of Nothing

The Great Depression never ate the country alive. WWII refuses to put out its raging fires. Every major city across 50 states has been blown sky-high by blitzing.

The only choice the denizens of a war-torn Los Angeles have left is to plunge into the deep dark of the metro tunnels and make a new life in the ruins of the subway rails below - with elbow grease, neon, and blood. In the crumbling catacombs beneath Hollywood, an ex-private eye named Jim "Jimbo" Maynard scours the dead, dark underworld for payoff on a gamble gone wrong, but stumbles instead on a subterranean metropolis divided by vice, vendettas, mysteries, and murder plots. In order to hunt down the butchers of two seemingly unrelated corpses, Jim will come up against warring mob bosses, backstabbing bookies, mad inventors, tin titans, bootleg rum-running, corrupted coppers, and electromagnetic revolvers.

Welcome to The Hollywoodholes. Welcome to your chrome coffin.

Das sagen andere Hörer zu A Fistful of Nothing