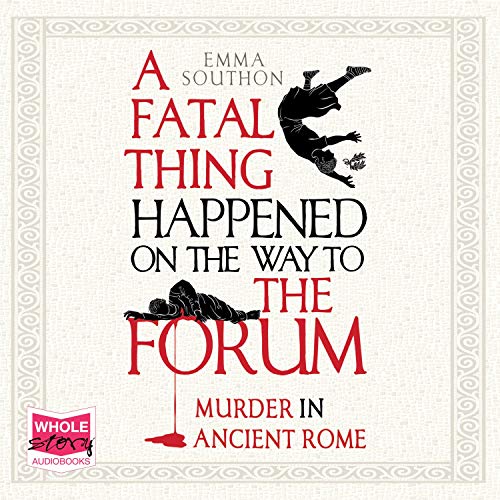 A Fatal Thing Happened on the Way to the Forum

In Ancient Rome all the best stories have one thing in common: murder.

Romulus killed Remus to found the city, Caesar was assassinated to save the Republic. Caligula was butchered in the theatre, Claudius was poisoned at dinner and Galba was beheaded in the forum. In one 50-year period, 26 emperors were murdered. But what did killing mean in a city where gladiators fought to the death to sate a crowd?

Emma Southon examines real-life homicides from Roman history to explore how perpetrator, victim and the act itself were regarded by ordinary people. Inside Ancient Rome's unique culture of crime and punishment, we see how the Romans viewed life, death and what it means to be human.

Rome from the underdog's perspective

Emma Southon does an amazing job presenting the Roman society from the perspective of the marginalized and underdogs - women, slaves, infames etc - which I have not encountered like that before.

The audiobook was a delight to listen to. The narrative is captivating, the facts super interesting and stuff you will bit find in your normal history book, and Emma Southon does a great job transcending the mere listing of facts and explaining everything in a bigger context instead. Also, she made me laugh out loud more than a few times with her sometimes dry sometimes silly humor.

The narrator also has a super pleasant and easy to listen to voice which made the whole experience even more fun.

I've recommended this book to all of my friends that are somewhat susceptible to Roman history and if you read this, you should get it as well!

Ps: I'm not an English native speaker so please excuse any mistakes I might have made here.