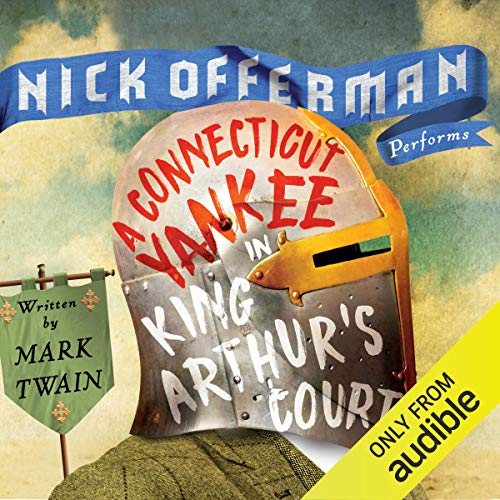 I didn't think it was possible. Nick Offerman's reading of Tom Sawyer is one of my all-time favorites - a performance that made me fall in love with Twain's classic all over again. But I may actually love his performance here even more. The character of Hank Morgan - a bearish, no-nonsense adherent to practicality and pragmatism - could be seen as a natural predecessor to Ron Swanson (the character Offerman played in Parks and Recreation) as well as the very embodiment of the gumption the actor writes of in his own work. That is to say, this is a character tailor-made for Offerman. Even better is the fact that we get to hear him voice boastful knights and flittery damsels and a villainous Merlin. But mostly, I'm happy to see Offerman quickly becoming the go-to performer and interpreter of Twain's brilliant stories. —Doug, Audible Editor

“There’s something about his wry Midwestern merriment that aspires to Twainishness.” (Men’s Journal)

With his trademark mirth and boundless charisma, actor Nick Offerman brought the loveable shenanigans of Twain's adolescent hero to life in The Adventures of Tom Sawyer. Now, in yet another virtuosic performance, the actor proves that despite being separated by a span of over a century, his connection to the author and his work is undeniable and that theirs is a timeless collaboration that should not be missed. Trading in the idyllic banks of Twain's Mississippi for medieval England, Offerman regales listeners with one of American literature's foremost satires and the author's most inventive and darkly funny pieces of fiction.

Hank Morgan is the archetype of modern man in 19th-century New England: adept at his trade as a mechanic, innovative, forward thinking. So when a blow to the head inexplicably sends him back in time 1300 years and places him in Camelot, instead of despair, he feels emboldened by the prospect placed before him and sets out to modernize and improve the lives of his fellow citizens. But, in order to do so, he'll need to contend with brash nobles, superstitious nincompoops, and a conniving, blowhard wizard.

While time travel has become a common trope in storytelling today, in Twain's time it was truly a novel idea; all the more imaginative when you consider how it's used for satirical effect. A thinly veiled critique of the political and social institutions that impede progress and a scathing condemnation of the naiveté that allows them to thrive, A Connecticut Yankee in King Arthur's Court saw Twain's biting wit and sharp tongue honed to a fine point.

Told primarily through Hank's first-person perspective, Offerman effortlessly captures the Yankee's straightforward, matter-of-fact gruffness. Like Offerman - whose woodworking skills are the stuff of legend - Hank is a natural builder of things and his can-do, by-the-bootstraps spirit finds its vocal foil in Offerman's crisp delivery. But it's in Offerman's ability to convey the myriad characters and absurdities Hank faces that makes this an incomparable listening experience: the flowery embellishments and insane braggadocio of knights; the lilting, feathery sing-song of Clarence; the garrulous, long-winded pomp of the aristocracy; the old, dithering windbag pronouncements of Merlin. Offerman plays each of these with a humor and humanity that Twain himself would have enjoyed.

a really great performance of this timeless mark twain classic by nick offerman. would recommend!