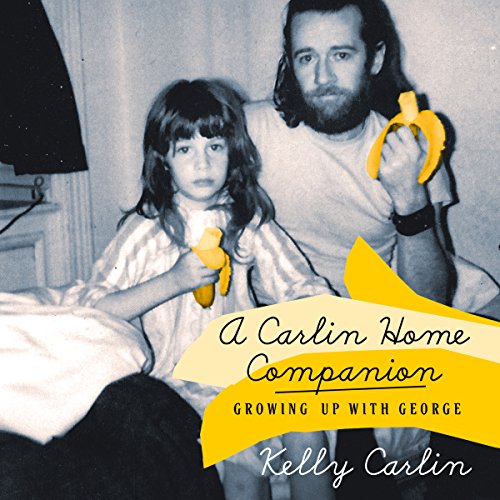 Truly the voice of a generation, George Carlin gave the world some of the most hysterical and iconic comedy routines of the last 50 years. From the "Seven Dirty Words" to "A Place for My Stuff" to "Religion Is Bullshit", he perfected the art of making audiences double over with laughter while simultaneously making people wake up to the realities (and insanities) of life in the 20th century. Few people glimpsed the inner life of this beloved comedian, but his only child, Kelly, was there to see it all.

Born at the very beginning of his decades-long career in comedy, she slid around the "old Dodge Dart" as he and wife Brenda drove around the country to "hell gigs". She witnessed his transformation in the '70s, as he fought back against - and talked back to - the establishment; she even talked him down from a really bad acid trip a time or two. ("Kelly, the sun has exploded and we have eight, no, seven-and-a-half minutes to live!") Kelly not only watched her father constantly reinvent himself and his comedy, but also had a front-row seat to the roller-coaster turmoil of her family's inner life - alcoholism, cocaine addiction, life-threatening health scares, and a crushing debt to the IRS. But having been the only "adult" in her family prepared her little for the task of her own adulthood. All the while, Kelly sought to define her own voice as she separated from the shadow of her father's genius.

With rich humor and deep insight, Kelly Carlin pulls back the curtain on what it was like to grow up as the daughter of one of the most recognizable comedians of our time and become a woman in her own right. This vivid, hilarious, heartbreaking story is at once singular and universal - it is a contemplation of what it takes to move beyond the legacy of childhood and forge a life of your own.

The audiobook includes bonus audio recordings of George Carlin and a conversation between Kelly Carlin and Garry Shandling.