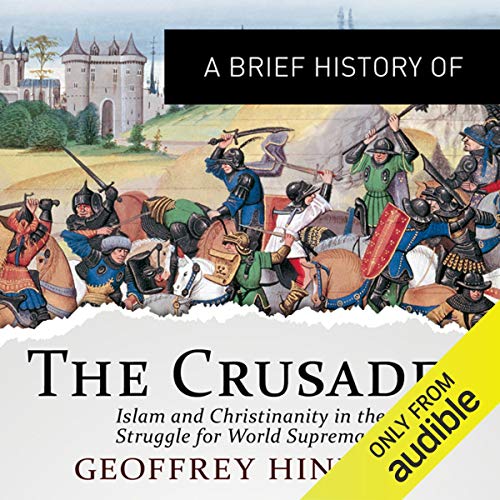 A Brief History of the Crusades: Islam and Christianity in the Struggle for World Supremacy

Why did the medieval Church bless William of Normandy's invasion of Christian England in 1066 and authorise cultural genocide in Provence? How could a Christian army sack Christian Constantinople in 1204? Why did thousands of ordinary men and women, led by knights and ladies, kings and queens, embark on campaigns of fanatical conquest in the world of Islam?

The word 'Crusade' came later, but the concept of a 'war for the faith' is an ancient one. Geoffrey Hindley instructively unravels the story of the Christian military expeditions that have perturbed European history, troubled Christian consciences and embittered Muslim attitudes towards the West. He offers a lively record of the Crusades, from the Middle East to the pagan Baltic, and fascinating portraits of the major personalities, from Godfrey of Bouillon, the first Latin ruler of Jerusalem, to Etienne, the visionary French peasant boy who inspired the tragic Children's Crusade.

Addressing questions rarely considered, Hindley sheds new light on pressing issues surrounding religious division and shows how the Crusades have helped to shape the modern world and relations between Christian and Muslim countries to this day. Geoffrey Hindley lectures internationally on medieval history. His many books include The Shaping of Europe, Saladin: A Biography, The Book of Magna Carta and A Brief History of the Crusades.

He also co-founders of the Society for the History of Medieval Technology and Science. He lives in France.

Das sagen andere Hörer zu A Brief History of the Crusades: Islam and Christianity in the Struggle for World Supremacy