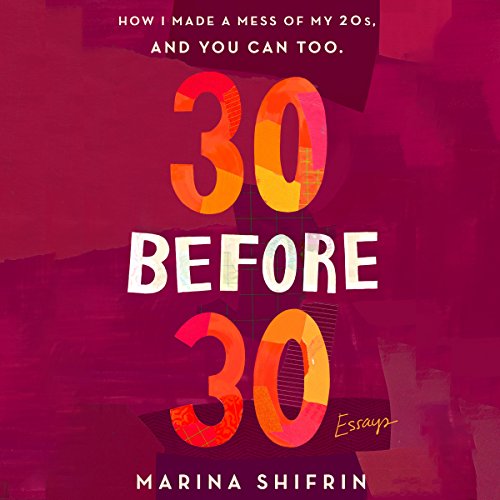 A charming, relatable and hilarious collection of essays documenting a young woman's attempt to accomplish 30 life goals before turning 30.

Something was nagging Marina Shifrin. As a freshly minted adult with student loan payments, a barely hospitable New York apartment, a “real” job she hated that paid her enough to get by if she also worked two other jobs, something needed to change. Over a few bottles of Two Buck Chuck, Marina and her friend each made lists of 30 things they’d do before the age of 30. The first thing on Marina’s list was, “Quit My Shitty Job”. So she did, and just like that the List powered her through her twenties.

In 30 Before 30, Marina takes listeners through her list and shares personal stories about achieving those goals. Ranging in scope from the simple (ride a bike over the Brooklyn Bridge, donate hair) to the life-changing (Move to a different country, become Internet famous), each story tells listeners that we don’t all have it figured out, and that’s okay. But for Marina, she did become internet famous (a viral video of her quitting her job after moving to Asia has nearly 19 million views on YouTube) and now writes for Comedy Central’s hit show @Midnight, is also an in-demand stand up, and had a very popular Modern Love column published in the New York Times. None of that would have happened if she didn’t start her list that night. Thank you, Two Buck Chuck.

Told with humor and heart, 30 Before 30 will entertain, motivate, and challenge listeners to get out of their comfort zones and live their best lives.