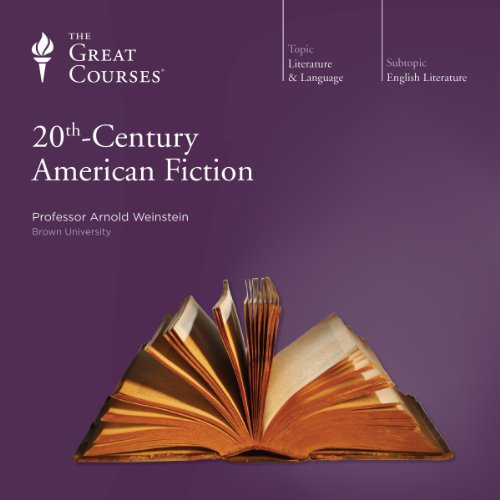 Hemingway. Fitzgerald. Faulkner. These and other giants of literature are immediately recognizable to anyone who loves to read fiction and even to many who don't.

Now, thanks to these 32 lectures, you can develop fresh insight into some of the greatest American authors of the 20th century. Professor Weinstein sheds light not only on the sheer magnificence of these writers' literary achievements but also explores their uniquely American character as well. Despite their remarkable variety, each author represents an outlook and a body of work that could only have emerged in the United States. As such, the aim of these lectures is to analyze and appreciate some of the major works of American fiction, using as a focal point the idea of freedom of speech.

The works you'll investigate here include Winesburg, Ohio (among the most poignant descriptions of life at the beginning of the century); Light in August (which depicts the ravages of racism in the American South); Their Eyes Were Watching God (the first – and perhaps the best – account of growing up black and female in America); Slaughterhouse-Five (a poignant and wacky take of mass destruction and aliens); Sula (an experimental novel that makes rubble out of the conventions of black and white culture); and White Noise (which depicts our encounter with the technological madhouse in which we live).

These American fictions, seen together, tell a composite story about coping, about fashioning both a story and a life. Much is dark in these stories, but the honesty and integrity of these writers makes us realize that reading is as much a lifeline as it is entertainment or education.