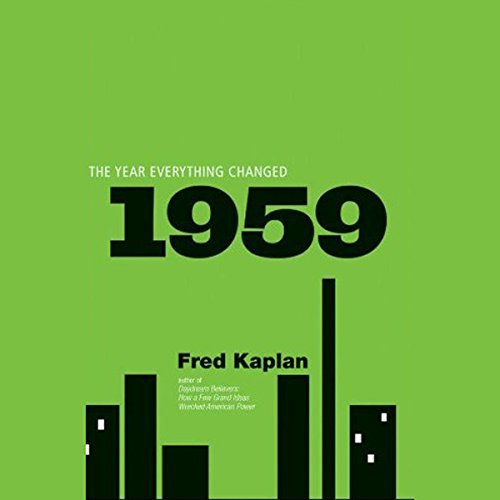 1959: The Year Everything Changed

1959: The Year Everything Changed

Acclaimed national security columnist and noted cultural critic Fred Kaplan looks past the 1960s to the year that really changed America. While conventional accounts focus on the 60s as the era of pivotal change that swept the nation, Fred Kaplan argues that it was 1959 that ushered in the wave of tremendous cultural, political, and scientific shifts that would play out in the decades that followed.

Pop culture exploded in upheaval with the rise of artists like Jasper Johns, Norman Mailer, Allen Ginsberg, and Miles Davis. Court rulings unshackled previously banned books. Political power broadened with the onset of Civil Rights laws and protests. The sexual and feminist revolutions took their first steps with the birth-control pill. America entered the war in Vietnam, and a new style in superpower diplomacy took hold. The invention of the microchip and the Space Race put a new twist on the frontier myth.

As Kaplan vividly chronicles, 1959 was a vital year that set the world as we know it in motion, spearheading immense political, scientific, and cultural change. Drawing fascinating parallels between the country in 1959 and today, Kaplan offers a smart, cogent, and deeply researched take on a overlooked period in American history.

"Narrator Joe Barrett’s voice sounds like a strong whisper. His unique manner with language and inflection sets him apart from any other reader, making all of his narrations memorable. The mixture of his softness with events of the '60s sets a nostalgic mood that might stir memories of bygone days." (AudioFile)
©2009 Fred Kaplan (P)2010 Audible, Inc.