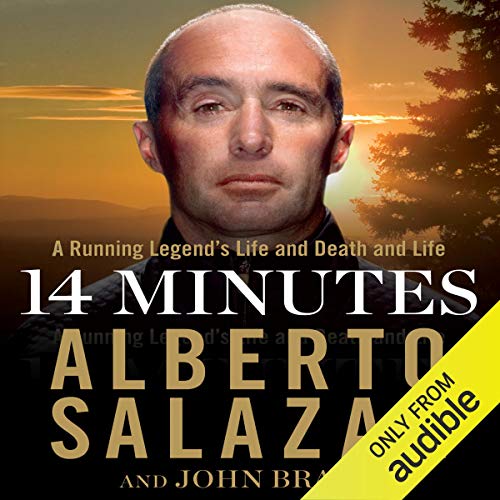 14 Minutes is the memoir of Alberto Salazar, the most accomplished, charismatic, and controversial marathoner in history. The narrative is framed in the 14 minutes in which Salazar was clinically dead after his shocking heart attack in 2007. The story describes his tempestuous relationship with his father, Jose Salazar, who was a close ally of Fidel Castro during the Cuban revolution. The narrative follows Alberto's boyhood in New England, his rise to stardom at the University of Oregon, his dramatic victories in the New York City and Boston Marathons, his long malaise due to injuries, which resulted in a near-suicidal depression; his resurgence due to intense spiritual experiences and discipline; his close alliance with Phil Knight and the Nike corporation; and describes his numerous near-death experiences.

In this book those 14 minutes will be considered from every possible angle. Salazar will share some of the surprising things he's learned about cardiovascular disease and cardiovascular health. He will also share how modern medical science and technology are fundamentally changing the way we think about death. Salazar will acquaint listeners with the latest research studying the near-death experience, which has burgeoned into a field of its own, blending science and the spirit in an especially fascinating combination.

But don't worry sports fans: Mostly this book will tell the story of how a skinny, shy, insecure Cuban-American kid from small-town Massachusetts developed by sheer will - and God's grace - into the greatest distance runner of his time. But throughout Salazar's narrative he will keep returning to those 14 black, shattering, miraculous minutes. Surviving virtual death taught him how to live and now it is time for him to share what he's learned.