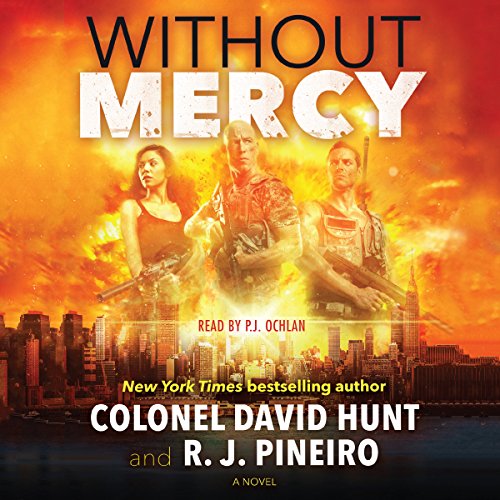 When ISIS detonates nuclear weapons in two key American strongholds, the United States plunges into chaos, and the CIA scrambles to prevent a third tragedy in Without Mercy, a terrifying and topical thriller from Colonel David Hunt and R. J. Pineiro.

The unthinkable has happened: ISIS, covertly assisted by Pakistan's intelligence services, has acquired nuclear weapons and the ability to deliver them anywhere in the world. They begin with an attack at Bagram Airfield, America's largest military base in Afghanistan. A second weapon is detonated in Battery Park in New York City. The blast levels a square mile of Manhattan, including the Financial District. Hundreds of thousands perish. The American economy is in chaos. Banks close their doors. The US supply chain is disrupted. Riots and looting break out while enemies in the Middle East burn US flags in celebration.

The stakes skyrocket when Islamabad CIA Station Chief Bill Gorman unearths evidence of a third bomb headed our way. Across two continents the chase is on to find the runaway terrorists led by the ruthless and capable Salma Bahmani, star agent of Pakistan's Inter-Services Intelligence, the dread ISI. She will stop at nothing to deliver what could be the final nail in America's coffin.