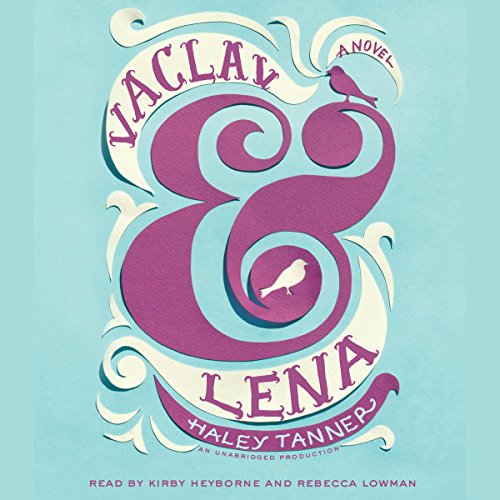 To refer to Vaclav and Lena, the debut novel from Haley Tanner, as a run of the mill "coming of age" story is to take away from its originality and spirit. Vaclav and Lena are two young friends who emigrated from Russia to grow up in the unfamiliar world of Brooklyn. Kirby Heyborne smoothly voices Vaclav's narrative, which comprises the majority of the novel, with great attention to the reticent, unfamiliar nature of his character. Rebecca Lowman picks up Lena's side of the story, her guarded narration perfectly depicting the lost, broken Lena.

Although Vaclav and Lena emigrated from Russia separately (Vaclav with his family; Lena with a series of distant relatives who didn't want her), they became fast friends when they met in ESL school. Lena spent each day after school at Vaclav's house in the comfort of his inviting, benevolent mother Rasia. Vaclav wanted to be a magician, and Lena wanted to be his lovely assistant. They took day trips to Coney Island where they watched in awe at the magicians performing their exotic tricks. But for all the good times they shared together, there were also times of struggle. As elementary age children in ESL school, they struggled together with the challenges of assimilating into a foreign culture. As teenagers, their relationship takes on new meaning, which presents a whole new set of challenges for the pair. Heyborne and Lowman work together, embodying Vaclav and Lena's hardships through their poignant narration.

Vaclav and Lena is more than just a coming of age story and more than just an immigration story. Tanner has developed two strong, unique characters that you can’t help but adore, and their story will linger for days after you've finished listening. Heyborne and Lowman deliver a powerful performance of Vaclav and Lena's story, their passions and vulnerabilities pervading the narration. Suzanne Day

Vaclav and Lena seem destined for each other. They meet as children in an ESL class in Brighton Beach, Brooklyn. Vaclav is precocious and verbal. Lena, struggling with English, takes comfort in the safety of his adoration, his noisy, loving home, and the care of Rasia, his big-hearted mother. Vaclav imagines their story unfolding like a fairy tale, or the perfect illusion from his treasured Magician's Almanac, but among the many truths to be discovered in Haley Tanner's wondrous debut is that happily ever after is never a foregone conclusion.

One day, Lena does not show up for school. She has disappeared from Vaclav and his family's lives as if by a cruel magic trick. For the next seven years, Vaclav says goodnight to Lena without fail, wondering if she is doing the same somewhere. On the eve of Lena's 17th birthday, he finds out.

Haley Tanner has the originality and verve of a born storyteller, and the boldness to imagine a world in which love can overcome the most difficult circumstances. In Vaclav & Lena she has created two unforgettable young protagonists who evoke the joy, the confusion, and the passion of having a profound, everlasting connection with someone else.