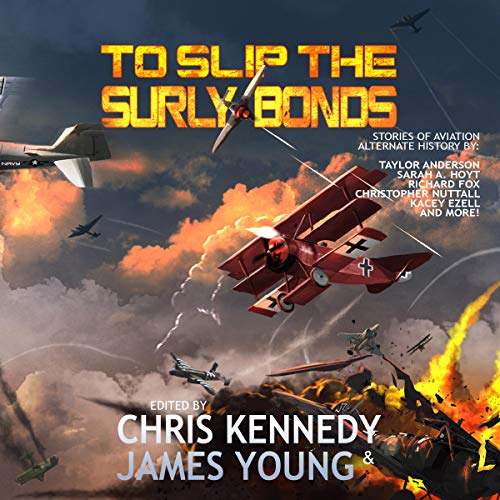 To Slip the Surly Bonds

Throughout the human experience, historians have wondered, “What if?” What if Americans had fought on the side of Germany in World War I? What if Germany had invested in naval aviation in World War II? What if Russia had started World War III?

Wonder no more, for these questions, along with many others, are answered within this audiobook. Told by a variety of award-winning authors, like Sarah Hoyt, the 2018 Dragon Award Winner for Alternate History, Richard Fox, the 2017 Dragon Award Winner for Best Military Science Fiction, and Kacey Ezell, the winner of the 2018 Baen Reader’s Choice Award, To Slip the Surly Bonds deals with aviation warfare that never happened in our world…but easily could have.

The second book in the exciting new Phases of Mars anthology series, there is something for everyone inside! From fighting alongside the Red Baron, to flying a P-38 Lightning, to present day air warfare, “To Slip the Surly Bonds” traces a century of aviation warfare…that wasn’t. From learning how the PBY got to the new world in Taylor Anderson’s The Destroyermen series…to fighting the French in a very different Vietnam, this book has it, so come aboard and find out “what if” all of these things had changed history…just a little. You’ll be glad you did!