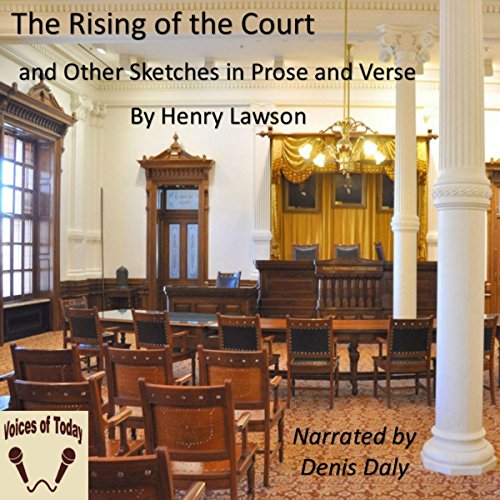 The Rising of the Court

This collection consists of eight short stories and nine poems and was first published in 1910. The opening story is an examination of a quaint legal custom in New South Wales whereby a defendant could be sentenced to a period of imprisonment that was to end when the court hearing finished. Lawson describes a day in court just before the holiday season in which the offenders are hoping that the magistrate will be in a benevolent mood and impose no sentence that extends beyond the "rising of the court".

The next six stories deal with characters encountering difficult situations, some heartbreaking and some comic but all informed by Lawson's wry sense of irony, which rarely sinks into unrelieved bitterness. In the final prose piece, Lawson explores the Australian concept of "mateship" as applied to friendships between characters in two plays by Shakespeare, Julius Caesar and Timon of Athens.

In both style and content, Lawson's verse is more conservative than his prose. His schemes of meter and rhyme are quite conventional, and he favors marching rhythms, which give his verse an upbeat quality that is often lacking in the stark world of his stories.

This collection is presented by the Australian narrator Denis Daly.

11. "The Friends of Fallen Fortunes"

Das sagen andere Hörer zu The Rising of the Court