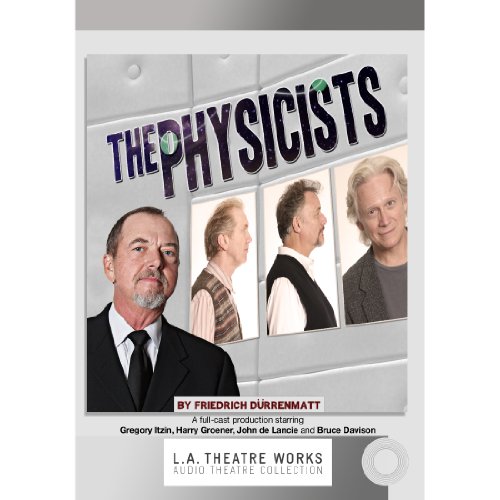 The dramatization of experimental and often cryptic Swiss author Frederich Durrenmatt’s play The Physicists is a satirical morality tale concerning science and ethics and is set in a mental asylum.

Legendary physicist, Johanne Mobius, is locked in a sanatorium and convinced he is being haunted by the ghost of King Solomon, while the two fellow patients he is locked away with believe they are Albert Einstein and Sir Isaac Newton.

Performed in front of a live audience by an all-star cast that includes veteran film actor Bruce Davison, John De Lancie (a.k.a. “Q” from Star Trek: The Next Generation), and Harry Groener, perhaps best known for playing Mayor Wilkins in Buffy the Vampire Slayer.

Johann Mobius, the world’s greatest physicist, is locked away in a madhouse along with two other scientists. Why? Because he is haunted by recurring visions of King Solomon, and the other two are convinced they are Einstein and Newton. But are these three actually mad? Or are they playing a murdererous game with the world at stake? This darkly comic satire probes the cost of sanity among men of science and whether it is the mad who are the truly sane.

The Physicists is part of L.A. Theatre Works’ Relativity Series featuring science-themed plays. Major funding for the Relativity Series is provided by the Alfred P. Sloan Foundation to enhance public understanding of science and technology in the modern world.