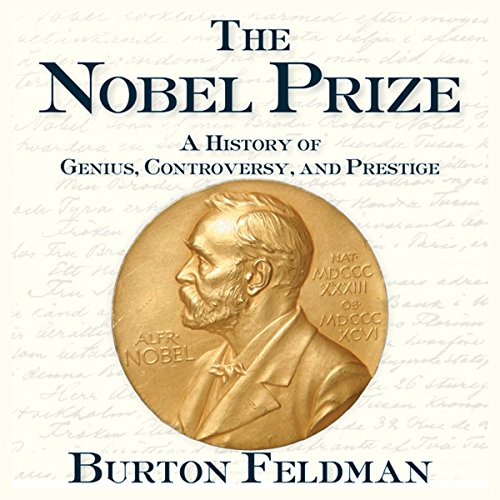 A fascinating intellectual history of the most prestigious prizes in the world. From their establishment in the will of the inventor of dynamite through their controversies, scandals, and political intrigues, this searching analysis manages to be both detailed and accessible at the same time. Performer Burton Feldman's smooth tones make for an easy listen, and many listeners will enjoy the historical anecdotes and gossipy tidbits that enliven certain tales. The analysis of who did and didn’t deserve to win is especially interesting; Gandhi never won, for one thing, while the inventor of the lobotomy did.

Founded 100 years ago by the inventor of dynamite, the Nobel Prize is the world's most celebrated and controversial honor. It grants its winners instant celebrity and acclaim for "service to mankind", despite accusations that it is too trendy, arbitrary, and narrow-minded. In examining both its fame and notoriety, Burton Feldman opens up the Nobel institution and process: how it originated, how it works, and how it is influenced by outside pressures (political, moral, personal, and academic).

The Nobel Prize is an extraordinary work that never fails to surprise, provoke, and entertain. This is the only book to explore every aspect of the prize: its founder, its aura, all its fields (literature, physics, chemistry, medicine, peace, and economics), and its laureates' personalities and rivalries, as well as the Nobel's controversies and blunders.

"Feldman relates the lively history of the most prestigious merit awards in consistently engaging fashion, touring its century-long existence forward from the will of dynamite mogul Alfred Nobel.... Feldman chronicles the evolving preferences of the Swedish awarding committees (e.g., their favoring of particle physics over astrophysics) and their quirks, exemplified by the truly bizarre awarding of the prize in medicine to the inventor of the lobotomy. In pointing out such mistakes, the mediocrities who got prizes, and the worthies - Emile Zola, Edwin Hubble, Mahatma Gandhi, etc. - who didn't, Feldman reveals the human side of the Nobels." (Booklist)