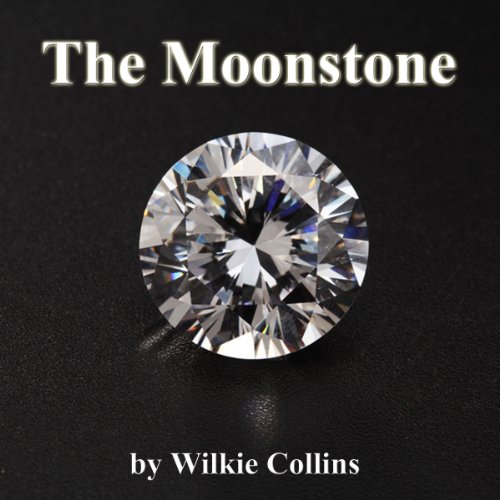 At her 18th birthday party, Rachel Verinder shows off the valuable Indian diamond that she inherited from her uncle. That night, it’s taken from her room. Thus begins the mystery at the heart of Wilkie Collins’ 1868 novel, The Moonstone.

As the listener learns, Rachel’s diamond is wanted by three Hindu priests who have sworn to recover the religious artifact. Rachel’s love interest, Franklin Blake, searches for the gem. The possible suspects include three Indian jugglers at the party and a maid who mysteriously drowned herself shortly afterwards.

Given a measured reading by Walter Covell in an English accent, Collins’ mystery story is chock full of intriguing characters and unexpected turns that lead to a surprising resolution.

The story involves a huge diamond, the moonstone, originally stolen from an Indian shrine. The gem is given to an English girl on her 18th birthday but disappears that same night. What follows is a spellbinding mystery that to this day has the power to draw the listener into its world of danger, suspense, and surprise.
Public Domain (P)1986 Jimcin Recordings
Klassiker Traditionelle Krimis Alternative Geschichte
Mehr anzeigen Weniger anzeigen

"The first, the longest, and the best of modern English detective novels." (T.S. Eliot)