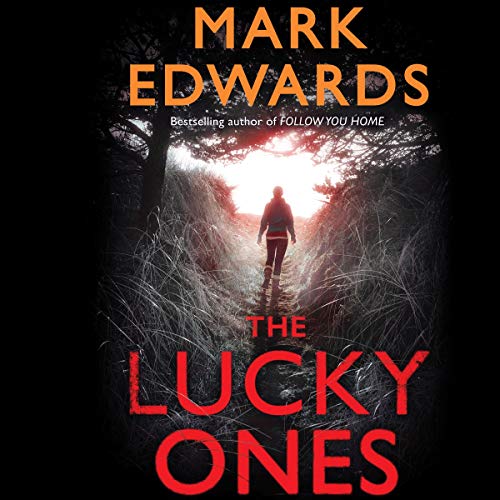 It was the happiest day of her life. Little did she know it was also the last.

When a woman's body is found in the grounds of a ruined priory, Detective Imogen Evans realises she is dealing with a serial killer - a killer whose victims appear to die in a state of bliss, eyes open, smiles forever frozen on their faces.

A few miles away, single dad Ben Hofland believes his fortunes are changing at last. Forced to move back to the sleepy village where he grew up following the breakdown of his marriage, Ben finally finds work. What's more, the bullies who have been terrorising his son, Ollie, disappear. For the first time in months, Ben feels lucky.

But he is unaware that someone is watching him and Ollie. Someone who wants nothing but happiness for Ben.

The Lucky Ones is the terrifying new thriller from the #1 bestselling author of Follow You Home.

Fiona Redbridge is 49 and has recently received a heart transplant. She now tries to live life to the fullest. When she is on her way back home on bike, she meets the guy with the van. Not her luckiest day, or?
Not far away, Ben Hofland, 36, wanna-be-novelist, does not have time to ponder his luck – it would be just pointless. After he had caught his wife Meghan having sex with the man he once considered his friend, his life is in turmoil. He left their life together in London behind and moved back to his native Shropshire, taking their eleven-year-old son Ollie with him. So now he lost his wife, faces Meghan fighting about the London flat and Ollie fighting about the new home, and has to deal with his mother’s terminal illness, the lack of a stable income, and neighbours from hell. But then things change.

At the same time, DI Imogen Evans it out to hunt the man who has already killed three, all found with that weird look upon their faces. The media dubbed him the “Shropshire Viper”. When she questions the families of the victims, something catches her attention. But would not that be just too far-fetched? She meets Ben as a witness when violence strikes next door.

I heard and, occasionally, read this (Whispersync). I had some ideas from the start, thanks to a large number of clues laid out by author Mark Edwards. None of them did really help … I got to like Ben, Imogen, and Olli and got wrapped up in a feeling of foreboding and ever-looming thrill (Ollie, speak to Dad, please!!!). Well, until the picture got clearer and I thought ‘oh, so what, then I will “only” (hah!) continue because it is so thrilling although I know the motive and I do not need to continue to figure out who did it’. How wrong I was! That guy knows how to set up a turning point AND is bold enough to pull it through even at the risk that the reader might think how much cleverer he is from a very early point on.

I thouroughly enjoyed how the book was being read by Simon Mattacks. English is not my mother tongue, so I did love his crystal-clear pronounciation of every single syllable. He also managed to give each of the characters their own voice, from Ollie’s sullen teenage-“but-Daaaad”-mode to dialects and accents and weirdo. I whispersynced to the ebook when in search for how the names would be spelled or quotations.

Very minor critical remark: somebody out at the editors thinks it is needed to switch the point-of-view, include that of the killer in particular. I get bored by that feature, honestly. It is very short in here, though. Oh, and the text on the cover might have been a little less informative / misleading.

For those sensitive about it: no sexual violence included. The violence in here is mostly depicted from its outcome (e.g. dead body – wound is such and such), rather than in describing torture. Language in general might be considered graphic (I found it convincing ;-).

I discussed that lately: if you have read enough crime stories/thrillers, you easily bore out. This one did manage to surprise me, deserved the name thriller and kept me going! I will look out for more from author AND speaker! 5 stars.