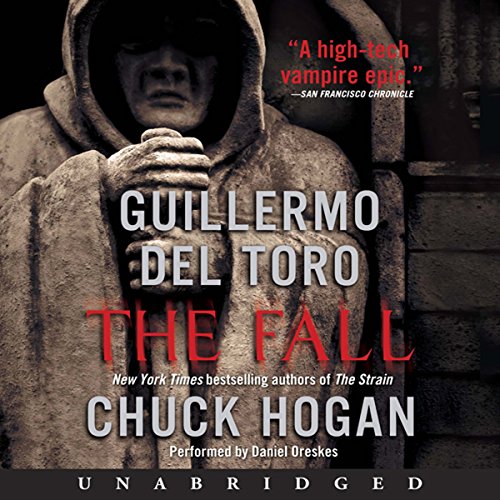 From the authors of the instant New York Times best seller The Strain comes the next volume in one of the most imaginative and frightening thriller series in many, many years.

Last week they invaded Manhattan. This week they will destroy the world. The vampiric virus unleashed in The Strain has taken over New York City. It is spreading and soon will envelop the globe. Amid the chaos, Eph Goodweather - head of the Centers for Disease Control's team - leads a band out to stop these bloodthirsty monsters. But it may be too late.

Ignited by the Master's horrific plan, a war erupts between Old and New World vampires, each vying for control. At the center of the conflict lies a book, an ancient text that contains the vampires' entire history... and their darkest secrets. Whoever finds the book can control the outcome of the war and, ultimately, the fate of us all. And it is between these warring forces that humans - powerless and vulnerable - find themselves no longer the consumers but the consumed.

Though Eph understands the vampiric plague better than anyone, even he cannot protect those he loves. His ex-wife, Kelly, has been transformed into a bloodcrazed creature of the night, and now she stalks the city looking for her chance to reclaim her Dear One: Zack, Eph's young son.

With the future of humankind in the balance, Eph and his team, guided by the brilliant former professor and Holocaust survivor Abraham Setrakian and exterminator Vasiliy Fet, and joined by a crew of ragtag gangsters, must combat a terror whose ultimate plan is more terrible than anyone has imagined - a fate worse than annihilation.

I loved this second part of the series. If you didn't listen first to The Strain, then please do so. It helps to listen to them in order. Love the authors style, quite a nail biter!!