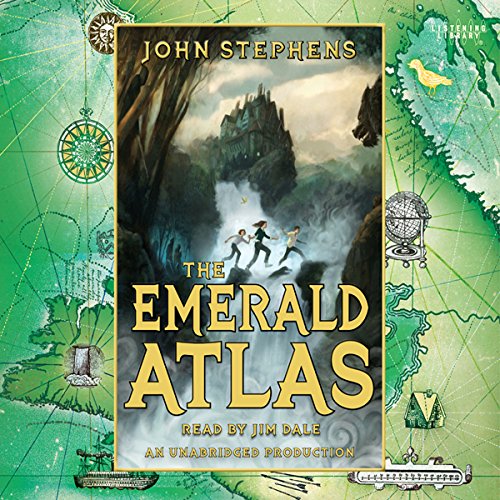 The Emerald Atlas author John Stephens has a Hollywood background, so it’s not surprising that his debut novel feels like a movie in the making, with elements that recall the Harry Potter series and other kid-friendly fantasy epics. It’s to Stephens’ credit, though, that Atlas never comes off like a cash-in or a cheap imitation: It has its own fully realized world and compelling characters, and the familiar aspects of the story serve mainly to place it in an honorable tradition.

The set-up is easily relatable and recognizable: A trio of siblings (Kate, Michael, and Emma) have been left to the fates after the disappearance of their parents, bounced from one comically horrific orphanage to the next. Their latest home, however, is somewhat different: It’s a mystical town that hides some magical secrets, and soon the kids have discovered a mysterious book that transports them back in time. There they face down an evil witch who is holding the town’s residents hostage. Wizards, dwarves, and ancient prophecies all come into play in a story that takes advantage of plenty of well-worn genre tropes.

Narrator Jim Dale handles it all masterfully, with a warm and inviting tone and some highly entertaining voices for the colorful supporting characters. Some of it might be a little too colorful, though, as Dale’s animated voice acting can become a little distracting. Still, he neatly delineates the various players in Stephens’ grand tapestry, and enhances the suspense of the various moments of peril. The book ends, naturally, with the set-up for the next installment of a planned trilogy, but it’s a satisfying enough story on its own. We can only hope for the same for the inevitable movie version. Josh Bell

Kate, Michael, and Emma have been in one orphanage after another for the last 10 years, passed along like lost baggage.

Yet these unwanted children are more remarkable than they could possibly imagine. Ripped from their parents as babies, they are being protected from a horrible evil of devastating power, an evil they know nothing about.

Before long, Kate, Michael, and Emma are on a journey to dangerous and secret corners of the world...a journey of allies and enemies, of magic and mayhem. And - if an ancient prophesy is correct - what they do can change history, and it is up to them to set things right.

The Emerald Atlas brims with humor and action as it charts Kate, Michael, and Emma's extraordinary adventures through an unforgettable, enchanted world.

Ok, I might be a little old to listen to children's stories, that's why I think the story is just ok, nice suspense, but I just looove love love the voice of Jim Dale, he is the perfect speaker for anything!!!! And the story can't be too bad, since I just downloaded the second book ;)

A nice story combined with a superb reader

I was looking for another story read by Jim Dale, who read Harry Potter in the American version, when I came upon this book. The Emerald Atlas is very enjoyable, Jim Dale is a superb reader and I'm looking forward to the next books in this projected trilogy.