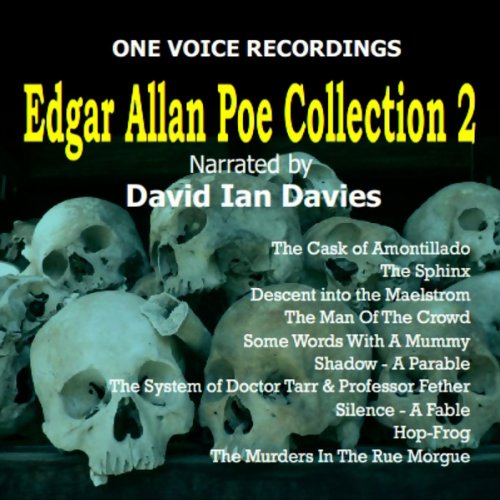 Featuring 10 of Poe's most infamous and twisted tales, The Edgar Allan Poe Collection II is a staple for any fan of Edgar Allan Poe's dark stories of madness and horror. David Ian Davies gives a chilling performance in this compendium of terror. Thrilling and sinister, Davies' voice is perfectly suited for these disturbing scenes of torture and madness. It's uncanny the way Davies is able to evoke and amplify the feelings of mystery and suspense present in Poe's work.

The Cask of Amontillado
The tale of one man's vengeance as he methodically plots and carries out the classically macabre luring of his unsuspecting tormentor.

The Descent into the Maelstrom
The Moskoe-strom of Norway is a real, terrifying, irresistible Force of Nature. The narrator�s guide recounts the experience which turned his raven-black hair white in a day.

Hop-Frog
A pain wracked dwarf bears continual humiliation as the court jester at the hands of his captor owners.

The Man of the Crowd
A day in the life of a man whose obsession is people watching.

Some Words With a Mummy
The storyteller is invited to the examination of an ancient mummy by a team of experts, but it is suddenly brought back to life.

The Sphinx
A journey into the mind of one who visits a relative, only to experience a vision foretelling his own doom.

The Murders in the Rue Morgue
An account of a bizarre crime accompanied by the grotesque, hideously violent murders of several people.

The System of Doctor Tarr and Professor Fether
As this peculiar, often comedic story progresses, it becomes increasingly difficult for a visitor to a madhouse to distinguish between the sane and the insane.

Shadow: A Parable
This very dark and forbidding writing speaks of our fears of the unknown and nameless threats and terrors that feed upon our doubts and our uncertainties.

Silence: A Fable
This short work capsulizes the ability of the human soul to better withstand the forces of nature and life.

©2005 One Voice Recordings, All Rights Reserved