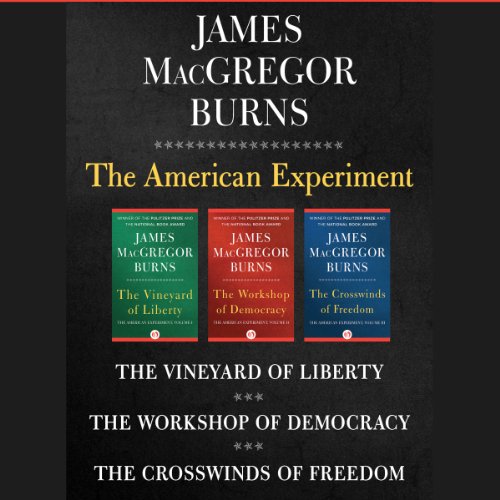 James MacGregor Burns’s stunning trilogy of American history, spanning the birth of the Constitution to the final days of the Cold War. In these three volumes, Pulitzer Prize and National Book Award-winner James MacGregor Burns chronicles with depth and narrative panache the most significant cultural, economic, and political events of American history.

In The Vineyard of Liberty, he combines the color and texture of early American life with meticulous scholarship. Focusing on the tensions leading up to the Civil War, Burns brilliantly shows how Americans became divided over the meaning of Liberty.

In The Workshop of Democracy, Burns explores more than a half-century of dramatic growth and transformation of the American landscape, through the addition of dozens of new states, the shattering tragedy of the First World War, the explosion of industry, and, in the end, the emergence of the United States as a new global power.

And in The Crosswinds of Freedom, Burns offers an articulate and incisive examination of the US during its rise to become the world’s sole superpower - through the Great Depression, the Second World War, the Cold War, and the rapid pace of technological change that gave rise to the “American Century.”