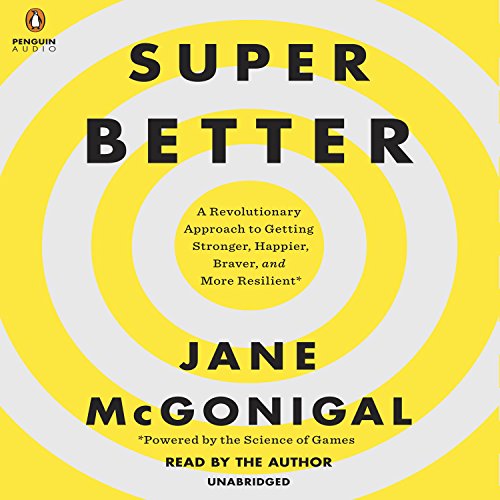 An innovative guide to living gamefully, based on the program that has already helped nearly half a million people achieve remarkable personal growth.

In 2009 renowned game designer Jane McGonigal suffered a severe concussion. Unable to think clearly or work or even get out of bed, she became anxious and depressed, even suicidal. But rather than let herself sink further, she decided to get better by doing what she does best: She turned her recovery process into a resilience-building game. What started as a motivational exercise quickly became a set of rules for "post-traumatic growth". These rules led to a digital game and a major research study. Today nearly half a million people have played SuperBetter to get stronger, happier, and healthier.

But the life-changing ideas behind SuperBetter are much bigger than just one game. In this book McGonigal reveals a decade's worth of scientific research into the ways all games change how we respond to stress, challenge, and pain. She explains how we can cultivate new powers of recovery and resilience in everyday life simply by adopting a more "gameful" mind-set.

McGonigal shows that getting superbetter is as simple as tapping in to the three core psychological strengths that games help you build:

SuperBetter contains nearly 100 challenges anyone can undertake in order to build these gameful strengths. It includes stories and data from people who have used the SuperBetter method to get stronger in the face of illness, injury, and other major setbacks as well as to achieve goals like losing weight, running a marathon, and finding a new job.

"For those in search of a new self-help regimen, SuperBetter might just be the answer. Strong medical research and firsthand accounts provide evidence that playing games can make you a healthier, happier, more confident person." (Kirkus)

“At the heart of SuperBetter is a simple and potentially transformative idea: We can use the same psychological strengths we display when we play games to confront real-life challenges, whether it's illness, injury, or just changing our habits for the better. Grounded in research and informed by McGonigal’s own sometimes harrowing experiences, this book will make you stop and think, then get you to act.” ("Daniel H. Pink, best-selling author of Drive and A Whole New Mind)

“SuperBetter delivers mind-boggling, science-supported, health-promoting knowledge and practical steps to bring more well-being into your life in a fun and engaging way, even if you are facing epic challenges like anxiety, depression, traumatic brain injury, or medical illness. Visionary innovator and researcher Jane McGonigal provides the proof and the practices that reveal how living a ‘gameful’ life can help you get personally stronger, closer to others, clearer in your mind, braver in your actions, and a greater hero in your own unfolding life story. SuperBetter is a playful, hands-on manual immersing you directly in challenges and adventures of creative gaming to develop more flexibility and resilience as you transform your life.” (Daniel J. Siegel, MD, clinical professor, UCLA School of Medicine and author of Mindsight)