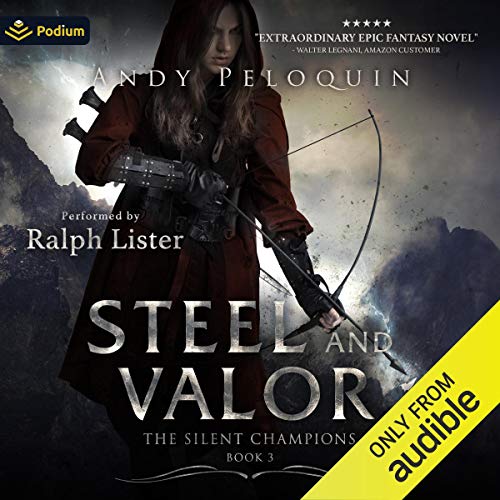 A hunt for a traitor. A desperate search for salvation. An uncovered secret that could destroy everything they hold dear.

Victory over an unstoppable barbarian horde and the salvation of an allied clan are distant memories for Aravon and his Grim Reavers. Now, they have a single objective: unmask the turncoat selling vital information to the enemy, and bring to justice the one guilty of murdering Aravon’s mentor and surrogate father.

The noble quest throws the specially-trained champions directly in the path of a rampaging force of ruthless enemies. Scrambling to defend a precarious position, Aravon and his companions must rely on the courage and skill of mysterious masked warriors guarding a secret treasure.

But even with their forces bolstered, the soldiers have little hope of survival, much less victory. Can Aravon defeat overwhelming odds to protect his people, or is his mission doomed to end in failure and death?

Steel and Valor is the third book in the epic Silent Champions military fantasy series. If you like intricate tactics, thrilling battle scenes, and brave soldiers fighting to their last breath, then you’ll love Andy Peloquin’s gripping series.