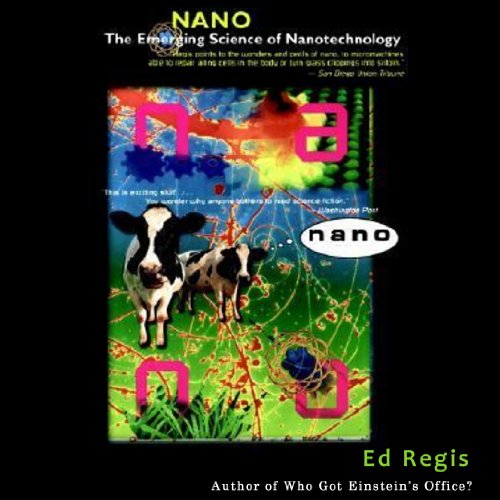 It's the ultimate technology: nanotechnology - the attempt to build ordinary objects from the atoms up, molecule by molecule. So named because its building blocks are the smallest pieces of matter, nanotechnology will give us complete control over the structure of matter, allowing us to build any substance or structure permitted by the Laws of Nature. Placing atoms as if they were bricks, nano-machines could turn grass clippings into prime sirloins - directly, without cows. They could turn coal into diamond, and sheets of diamond into rocket engines. Suitably reprogrammed, the tiny machines could repair all of your body's ailing cells. Science fiction? Actually, scientists have already isolated individual atoms and moved them at will, even using them to spell out words on a scale so small that the entire Encyclopedia Britannica can be written on the head of a pin. Conceived by Nobel Prize winning physicist Richard Feynmen, and pioneered by the remarkable K. Eric Drexler, who earned the first Ph.D. in the field he created at MIT more than a decade ago, nanotechnology is astoundingly near. In Nano, acclaimed science writer Ed Regis introduces us to the visionary engineers and scientists - as well as the critics - of this imminent technological revolution and shows how their work may soon begin changing the world as we know it, with fleets of molecular assemblers churning out essential commodities without human labor, the world economy would be transformed, famine and poverty banished forever. With cell-repair devices coursing through the human body, aging could be postponed, even halted, common diseases eradicated permanently. But would this new world be a return to Eden or a rash step into a dangerous future? Programmed differently, those same molecular machines could become agents more potent than the deadliest viruses. Articulate, intelligent, and entertaining, Regis reports on the wonders and perils of this new technology, and traces its philosophical implications.