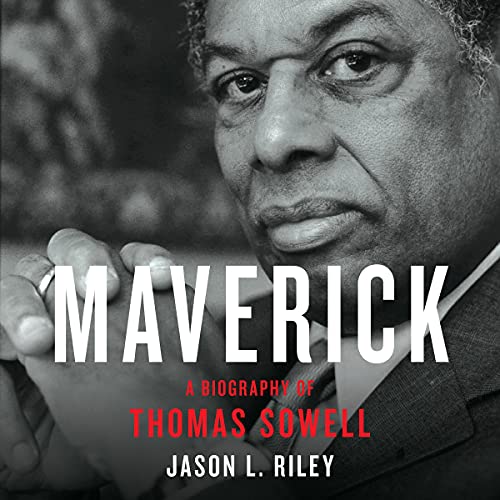 A biography of Thomas Sowell, one of America's most influential conservative thinkers.

Thomas Sowell is one of the great social theorists of our age. In a career spanning more than a half century, he has written over 30 books, covering topics from economic history and social inequality to political theory, race, and culture. His bold and unsentimental assaults on liberal orthodoxy have endeared him to many admirers but have also enraged fellow intellectuals, the civil-rights establishment, and much of the mainstream media. The result has been a lack of acknowledgment of his scholarship among critics who prioritize political correctness. In the first-ever biography of Sowell, Jason L. Riley gives this iconic thinker his due and responds to the detractors. Maverick showcases Sowell's most significant writings and traces the life events that shaped his ideas and resulted in a Black orphan from the Jim Crow South becoming one of our foremost public intellectuals.

“Fascinating.... Riley has achieved something rare in the field of intellectual biography­ - a recounting of a distinguished scholar’s life that draws on popular interest in Thomas Sowell the person and directs it to a lucid survey of Sowell’s volumi­nous intellectual output.” (National Review)

“Sowell’s vast and diverse intellectual output, devoured over the decades by a loyal readership, screamed for a biography a long time ago. Jason Riley delivers, in a pleasing style that arrives as a must-read for any fan of Thomas Sowell, what the public so wanted but inexplicably did not receive until now.” (American Spectator)

“Riley, a senior fellow at the Manhattan Institute and columnist for the Wall Street Journal, has done an admirable job distilling Sowell’s 90 years, 30-odd books, and countless columns into a single volume. Maverick will delight Sowell’s biggest fans and help introduce new generations to the man and his work.” (Washington Free Beacon)