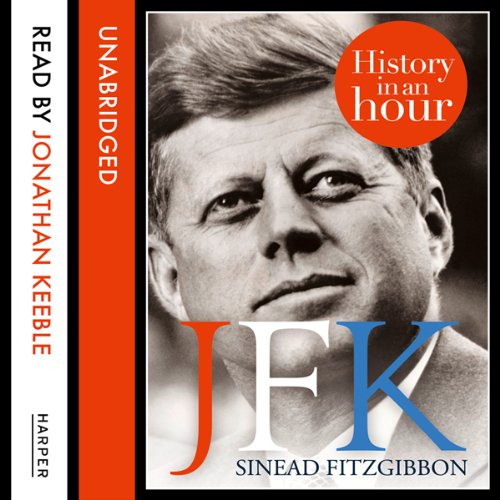 JFK: History in an Hour

Love history? Know your stuff with History in an Hour. John Fitzgerald Kennedy: America’s youngest president. But, barely 1,000 days into his presidency, was he assassinated. JFK in an Hour provides a compelling and comprehensive overview of this man credited with introducing an aspirational new approach to American politics. Learn about the Kennedy family, the cast that propelled JFK to success despite family tragedy. Discover Kennedy’s talented diplomatic skills when navigating the Space Race, the nuclear missile crisis and his sympathies with the fledging civil rights movement. Learn about the man himself, the charming son, brother, and husband, who maintained a charismatic public image, despite suffering from chronic illness all his life.

JFK in an Hour provides key insight into why Kennedy epitomised the hopes of a new decade, and remains such an influential figure to this day.

"If the past is a foreign country, History in an Hour is like a high-class tour operator, offering delightfully enjoyable short breaks in the rich and diverse continent of our shared past." (Dominic Sandbrook)
"The practice of history is ever-evolving, and the History in an Hour idea brings it back up to date for the digital age." (Andrew Roberts, Bookseller)
"This is genius." ( MacWorld.com)