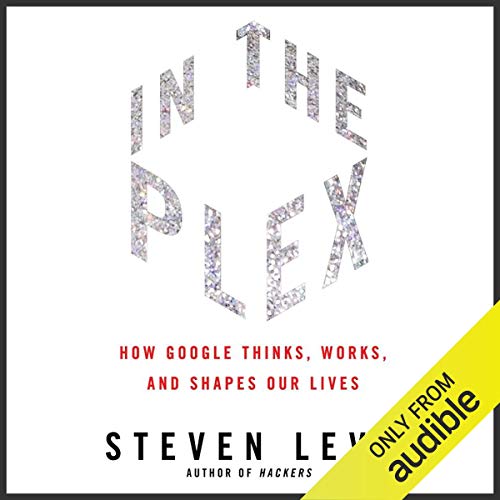 Don't be evil. That's Google's official motto. But what's really going on behind that simple little search box? Wired's Steven Levy guides us through a history of the rise of the internet, the development of complicated search algorithms, and, in many ways, a who's who of Silicon Valley — all beautifully narrated by L.J. Ganser.

What started as two geeks obsessed with improving internet search engines rapidly ballooned into a company eager to gobble up other useful startups (Keyhole Inc., YouTube, Picassa) as well as larger, more obviously valuable companies (most notably the marketing goliath, DoubleClick). Google's strategy has also been a game-changer in regards to the way we use data and cloud computing. Thanks to its highly lucrative AdWords and AdSense programs, the company exploded the way people think about the internet and the way people think about making money on the internet.

In the Plex gives listeners a real idea of what it's like to exist within the company's quirky culture. And Ganser knows when to keep it serious, but that doesn't stop him from adding just the right amount of snark to the “like” and “um”-ridden quotations from various engineer types. This edition also includes a fascinating interview between the author and early hire Marissa Mayer, the youngest woman to ever make Fortune's "50 Most Powerful Women in Business" list.

Levy dedicates a large section of the book to Google's controversial actions in China, the ultimate test of the company's “don't be evil” philosophy. Here, In the Plex takes an unexpected turn from company profile to a technology coming-of-age story for notorious “founder kids” Larry Page and Sergey Brin. How does “don't be evil” play out in a real world that is sometimes, well, evil? Results are mixed.

In addition to China, Levy touches on some of Google's failures, flubs, and flops, like the company's book scanning project and its development of Google Wave and Google Buzz. However, he seems to miss the point when he makes excuses for their inability to compete in the social space. It seems particularly obvious why a corporation completely run by data-obsessed engineers would have trouble making inroads in the world of social media, which is by nature more organic and subtle.

From the early days as a gonzo-style startup to the massive corporate giant that has quickly integrated itself into almost everything we do, this is an essential history of Google. —Gina Pensiero

Few companies in history have ever been as successful and as admired as Google, the company that has transformed the Internet and become an indispensable part of our lives. How has Google done it? Veteran technology reporter Steven Levy was granted unprecedented access to the company, and in this revelatory book he takes listeners inside Google headquarters - the Googleplex - to explain how Google works.

While they were still students at Stanford, Google co-founders Larry Page and Sergey Brin revolutionized Internet search. They followed this brilliant innovation with another, as two of Google's earliest employees found a way to do what no one else had: make billions of dollars from Internet advertising. With this cash cow (until Google's IPO, nobody other than Google management had any idea how lucrative the company's ad business was), Google was able to expand dramatically and take on other transformative projects: more efficient data centers, open-source cell phones, free Internet video (YouTube), cloud computing, digitizing books, and much more.

The key to Google's success in all these businesses, Levy reveals, is its engineering mind-set and adoption of such Internet values as speed, openness, experimentation, and risk taking. After it's unapologetically elitist approach to hiring, Google pampers its engineers with free food and dry cleaning, on-site doctors and masseuses, and gives them all the resources they need to succeed. Even today, with a workforce of more than 23,000, Larry Page signs off on every hire.

But has Google lost its innovative edge? It stumbled badly in China. And now, with its newest initiative, social networking, Google is chasing a successful competitor for the first time. Some employees are leaving the company for smaller, nimbler start-ups. Can the company that famously decided not to be "evil" still compete?

No other book has turned Google inside out as Levy does with In the Plex.

"Thoroughly versed in technology reporting, Wired senior writer Levy deliberates at great length about online behemoth Google and creatively documents the company’s genesis from a 'feisty start-up to a market-dominating giant'.... Though the author offers plenty of well-known information, it’s his catbird-seat vantage point that really gets to the good stuff. Outstanding reportage delivered in the upbeat, informative fashion for which Levy is well known." ( Kirkus Reviews)
"The book, a wide-ranging history of the company from start-up to behemoth, sheds light on the biggest threats Google faces today, from the Chinese government to Facebook and privacy critics." ( The New York Times)
“With a commanding voice, L.J. Ganser narrates this history and exploration of Google….Ganser’s stern voice is clear and moves through the text with determination.” ( AudioFile)