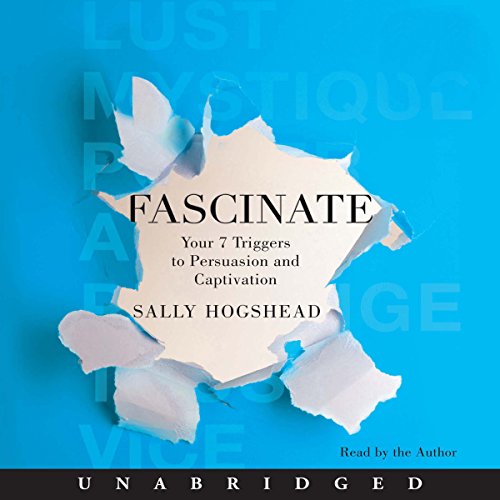 What triggers fascination, and how do companies, people, and ideas put those triggers to use/ Why are you captivated by some people but not by others? Why do you recall some brands yet forget the rest? In a distracted, overcrowded world, how do certain leaders, friends, and family members convince you to change your behavior?

Answer: fascination, the most powerful way to influence decision-making. It's more persuasive than marketing, advertising, or any other form of communication. And it all starts with seven universal triggers: lust, mystique, alarm, prestige, power, vice, and trust.

Fascination plays a role in every type of decision making, from the brands you choose to the songs you remember, from the person you marry to the employees you hire. And by activating the right triggers, you can make anything become fascinating.

To explore and explain fascination's irresistible influence, Sally Hogshead looks beyond marketing, delving into behavioral and social studies, historical precedents, neurobiology and evolutionary anthropology, as well as conducting in-depth interviews and a national study of a thousand consumers, to emerge with deeply rooted patterns for why, and how, we become captivated.

Hogshead reveals why the Salem witch trials began with the same fixations as those in Sex and the City. How Olympic athletes are subject to obsessions similar to those of fetishists. How a 1636 frenzy over Dutch tulip bulbs perfectly mirrors the 2006 real-estate bubble. And why a billion-dollar "Just Say No" program actually increased drug use among teens, by activating the same "forbidden fruit" syndrome as a Victoria's Secret catalog.

Whether you realize it or not, you're already using the seven triggers. The question is, are you using the right triggers, in the right way, to get your desired result? This book will tell you how.

"[T]his slight but practical work packs a big punch." ( Publishers Weekly)
“Can you dissect ‘fascination’? Sally Hogshead says, ‘Yes.’ Fascination is arguably the most powerful of product attachments—and this pioneering book helps us approach the word and the concept in a thoughtful and also practical manner.” (Tom Peters)
“This is a transformative work, a beautifully written book that will forever change the way you see the world. I loved it. Let me be really clear: you need to buy this book, devour it, absorb it and then buy copies for your colleagues. A lot of copies.” (Seth Godin)