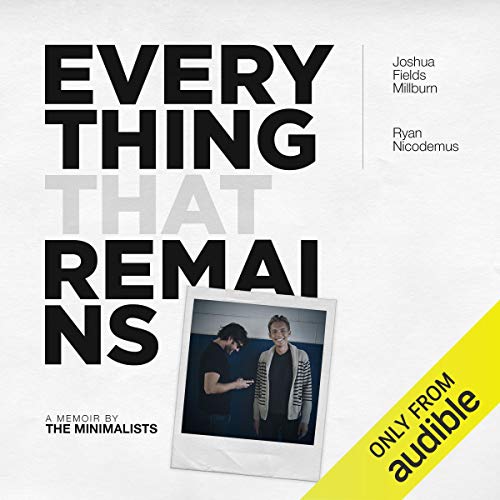 What if everything you ever wanted isn't what you actually want? Twenty-something, suit-clad, and upwardly mobile, Joshua Fields Millburn thought he had everything anyone could ever want. Until he didn't anymore.

Blindsided by the loss of his mother and his marriage, Millburn started questioning the life he had built for himself.

Then he discovered minimalism...and everything started to change.

Four years later, Millburn had embraced simplicity. In the search for something more substantial than compulsory consumption and the broken American dream, he jettisoned most of his material possessions, paid off loads of crippling debt, and walked away from his six-figure career.

Once everything was gone, what was left? Not a how-to book but a why-to book, Everything That Remains is the touching, surprising story of what happened when one young man decided to let go of everything and begin living more deliberately. Heart-rending, uplifting, and deeply personal, this engrossing memoir is peppered with insightful interruptions by Ryan Nicodemus, Millburn's best friend of 20 years.

Please read the next book yourself

I’m a subscriber to your podcasts and I was quite disappointed by the poor performance of your professional reader/speaker. You guys could have done it much better yourself.

The gentleman reading it slurs his words so badly and lacks any intonation that - despite a keen interest for the content - I usually fall asleep within 10 minutes. I like the book as such though, which is why it still gets a high overall rating from me.

Ich finde die Message des Buches hammer. Der Sprecher ist jedoch eine Schlaftablette.
I liked the books message, I just didn’t like the way the speaker emphasized or should I rather say not emphasized the words he was saying.

I’ve always been captivated by stories. The story of Ryan and Joshua, real, empowering, and inspiring, has awake me. Thanks!

Inspiring Stories towards a more meaningful life. It did take some time to get used to the voice but after that I liked it a lot. :)

Thank you. Started with clothes and just restructured my film production company. Minimal overheads. All resscources in our next film. Feels good. Visit Munich one day.