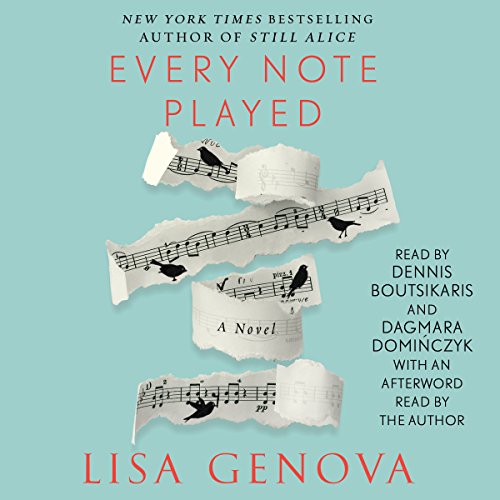 From neuroscientist and New York Times best-selling author of Still Alice comes a powerful and heartbreaking exploration of regret, forgiveness, freedom, and what it means to be alive.

An accomplished concert pianist, Richard received standing ovations from audiences all over the world in awe of his rare combination of emotional resonance and flawless technique. Every finger of his hands was a finely calibrated instrument, dancing across the keys and striking each note with exacting precision. That was eight months ago.

Richard now has ALS, and his entire right arm is paralyzed. His fingers are impotent, still, devoid of possibility. The loss of his hand feels like a death, a loss of true love, a divorce - his divorce.

He knows his left arm will go next.

Three years ago, Karina removed their framed wedding picture from the living room wall and hung a mirror there instead. But she still hasn't moved on. Karina is paralyzed by excuses and fear, stuck in an unfulfilling life as a piano teacher, afraid to pursue the path she abandoned as a young woman, blaming Richard and their failed marriage for all of it.

When Richard becomes increasingly paralyzed and is no longer able to live on his own, Karina becomes his reluctant caretaker. As Richard's muscles, voice, and breath fade, both he and Karina try to reconcile their past before it's too late.

Poignant and powerful, Every Note Played is a masterful exploration of redemption and what it means to find peace inside of forgiveness.

"Narrators Dennis Boutsikaris and Dagmara Dominczyk bring to life this compelling story... Boutsikaris gets inside the mind and spirit of Richard... Dominczyk brings complicated layers of anger, regret, resentment, confusion, and love to the voice of estranged wife Karina." (AudioFile)