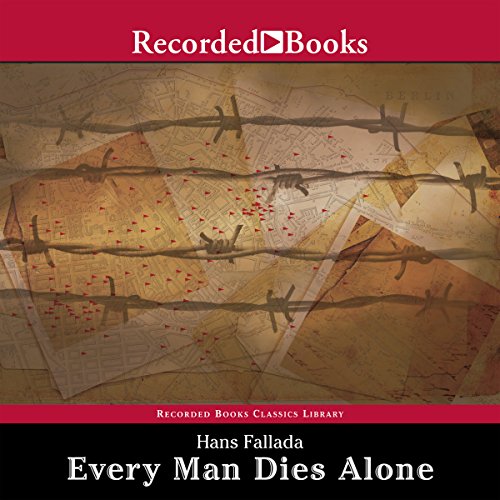 On its first publication into English in 2009, Hans Fallada’s 1947 book instantly took its place amongst 20th-century classics, aided (with the exception of a few jarring choices) by Michael Hoffman’s clean and lively translation. This recording, dripping with character, should help spread the word of this modest masterpiece even further.

Essentially, the book shows how corruption, intimidation, and fear radiate outwards from a morally bankrupt political center to the furthest reaches of society - a world of fear where neighbors and strangers alike are on the make, not to be trusted. The effects of countless assaults on personal decency and integrity are pitilessly displayed as, like an unblinking camera, Fallada follows each plot line to its conclusion. The remorseless force of destiny that propels each event is no less harrowing for being inevitable.

George Guidall possesses an idiosyncratic voice - if you already love this book, no doubt each character is a vivid presence in the back of your mind, and it will take a while to acclimate to Guidall’s aged and vinegary voice. But it is also a surprisingly malleable instrument - Fallada’s rich cast of characters is wholly present as Guidall shifts between long-suffering, resolute, broken, wheedling, pleading, and avuncular.

Guidall’s performance brings life to Fallada’s achievement in combining the cat-and-mouse criminal investigation of Crime and Punishment with Balzac’s exploration of society’s lower orders: In his portrayal of the cynical and relentless Gestapo inspector Escherich, the voice drips with insinuation and corruption, while the simple proletarian couple at the heart of the book speak with long-suffering endurance and increasingly angry resistance.

Every Man Dies Alone is also striking in the depth and complexity of its female characters, and here, too, Guidall delivers a set of subtly shaded performances. And in the last chapters, where suffering and oppression are raised to a state of grace, the spoken and written word become indivisible as the dramatic power of Fallada’s redemptive vision is movingly delivered by Guidall. --Dafydd Phillips

Hans Fallada wrote this stunning novel in only 24 days - just after being released from a Nazi insane asylum. Based on a true story, Every Man Dies Alone tells of a German couple who try to start an uprising by distributing anti-fascist postcards during World War II. But their dream ultimately proves perilous under the tyranny that dominates every corner of Hitler’s Germany.

"The book has the suspense of a John le Carré novel, and offers a visceral, chilling portrait of the distrust that permeated everyday German life during the war." (The New Yorker)