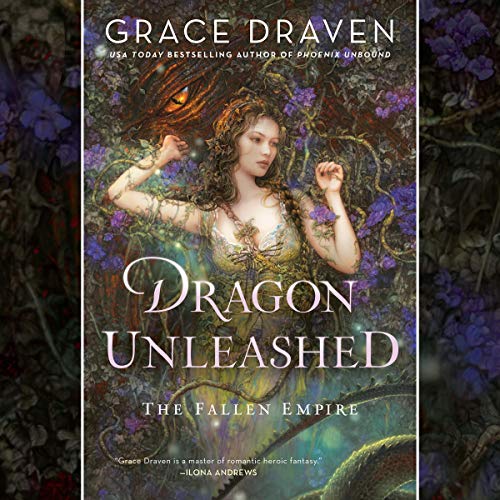 A dragon shape-shifter and a healer with power over the earth fight a corrupt empire in this thrilling and deeply emotional romantic fantasy from the USA Today best-selling author of Radiance.

Magic is outlawed in the Krael Empire and punishable by death. Born with the gift of earth magic, the free trader Halani keeps her dangerous secret closely guarded. When her uncle buys a mysterious artifact, a piece of bone belonging to a long-dead draga, Halani knows it's far more than what it seems.

Dragas haven't been seen for more than a century, and most believe them extinct. They're wrong. Dragas still walk among the denizens of the empire, disguised as humans. Malachus is a draga living on borrowed time. The magic that has protected him will soon turn on him - unless he finds a key part of his heritage. He has tracked it to a group of free traders, among them a grave-robbing earth witch who fascinates him as much as she frustrates him with her many secrets.

Unbeknownst to both, the Empire's twisted empress searches for a draga of her own, to capture and kill as a trophy. As Malachus the hunter becomes the hunted, Halani must risk herself and all she loves to save him from the empire's machinations and his own lethal birthright.

"Grace Draven has outdone herself with Dragon Unleashed! She’s deepened and enriched the world established in Phoenix Unbound, spinning new twists and turns on an already magically compelling mythology. An epic tale of deception and greed that tests the bonds of family loyalty, Dragon Unleashed is also deftly woven romance that burns with sexual tension, then becomes swooningly delicious. With an original, sexy take on dragon shifters and a smart, self-contained healer, Dragon Unleashed kept me mesmerized and longing for more. This may well be Draven’s best book yet." (Jeffe Kennedy, award-winning author of The Orchid Throne)