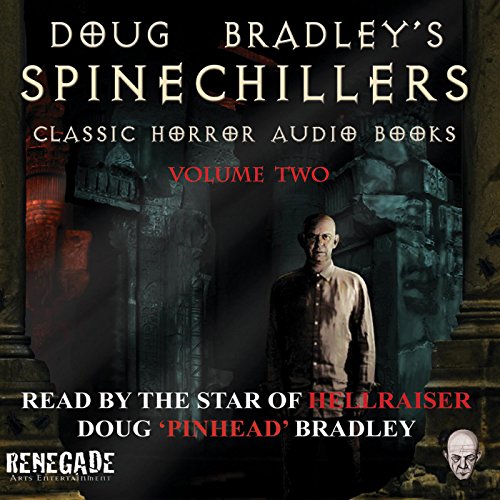 It kicks off with Charles Dickens' friend and collaborator Wilkie Collins' eerie tale of a man's dream of his own murder that comes too true, 'The Dream Woman'. Second on the bill is the master of American literature Edgar Allan Poe's classic story of doomed love, 'The Oval Portrait'.

Making his first appearance in the Spine Chillers series is Arthur Conan Doyle. Widely known for creating Sherlock Holmes, Conan Doyle was also the author of a number of horror stories that introduced new ideas to the genre. Volume 2 includes his story 'The The Ring of Thoth', a tale of Egyptian mummies, immortality, and deadly rivalry spanning four millennia.

What better way to round off this voulme than with the classic H.P. Lovecraft short story 'The Tomb'. The story works well as a companion piece to Volume 1's 'The Outsider', and concerns a mans desperate quest to find a place in the dark tomb of his ancestors.

This volume was recorded at the audioworkshop London and engineered by Joseph Degnan. Produced by Alexander Finbow.