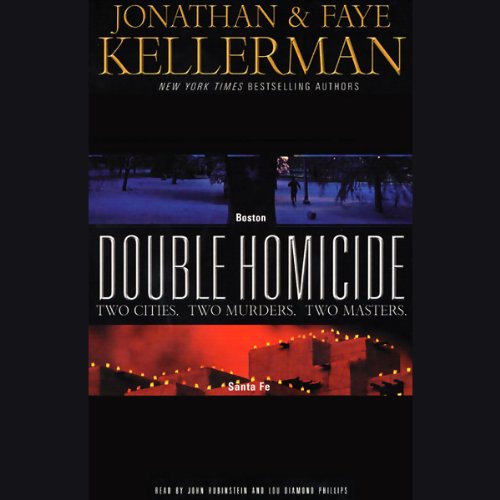 Faye and Jonathan Kellerman. Wife and husband. Each a best-selling author on her and his own. Now these masters of the crime novel are writing together for the first time, thrilling us with two riveting tales of murder and suspense.

Double Homicide: Boston
Basketball is an obsession in Beantown, producing emotions that run hot even in the coldest winter. This time, a flagrant foul during a college match leads to a fatal shooting. With the life of its star forward cut short, the entire city is putting pressure on Detectives Dorothy Breton and Michael McCain to find the perpetrator.

For Dorothy, who's raising two teenage boys on her own, the case hits close to home. She knows the victim's mother; their sons played on the same team. To Mickey, who's given up the fight against his bulging waistline, the investigation is poor consolation for being alone this holiday season. Together, they're looking to make an open-and-shut case, until startling evidence comes to light. Now two experienced cops can either keep it simple...or do what's right.

Double Homicide: Santa Fe
It's Christmastime, and police officers Darrel Two Moons and Steve Katz are expecting the usual gang assaults, feuding spouses, and alcohol-related misdemeanors. Then the call comes in from the Historic District: the reported death of an art gallery owner whose bludgeoned body stretches across a bleached pine floor like a big, nasty still life.

When he was in the NYPD, Katz saw more homicides weekly than he's seen in Santa Fe in three years. Two Moons, an Army brat and ex-Marine, is discovering his roots among local Indian potters. But everything personal goes by the wayside as they unearth the victim's enemies and follow a trail of motives that lies buried like layers of paint. As biting winds blow through town, Two Moons and Katz enter a dangerous world where murder has been perfected to an art form.