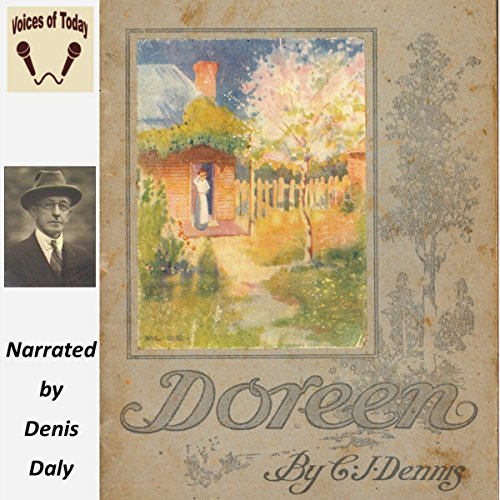 Clarence James Dennis (1876-1938) was a journalist and poet and is most famous for his prolific versifying in Australian vernacular. He wrote four verse novels:

The most famous of these is the first, in which Bill, a larrikin (or hoodlum) who operates in the gangland environment of Little Lon (referring to Little Lonsdale Street, in the central business district of Melbourne), meets and falls in love with Doreen. After enduring various tribulations and misunderstandings, the two marry and settle on a farm.

In the third verse novel, "Doreen", the subject of the present recording, the focus is on Bill's home environment. Bill, now transformed from a bitter thug to a steady and peaceful family man, bickers with Doreen over household issues, like the chopping of firewood, the raising of their son, young Bill, and medical treatment. Bill finds himself consistently outsmarted by his loyal - but strong-minded - wife and yields with wry grace to her manipulations and ministrations. The poem is divided into four sections: