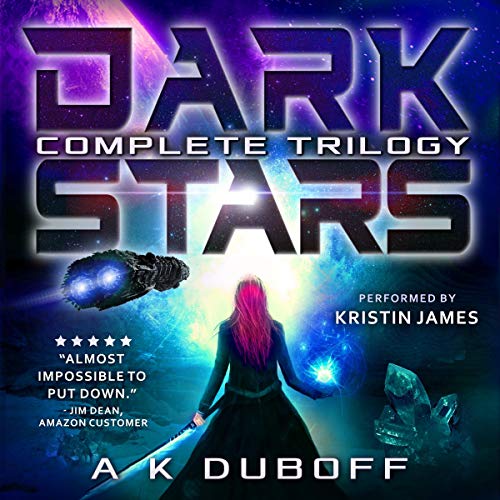 The hyperdimensional crystalline network allows reality to be reset to past moments in time....

After a routine "reset" on her homeworld, Elle Hartmut instead awakens on a spaceship. Her body is different, she has new seemingly magical abilities, and she’s told that the fate of known civilization is in her hands.

An alien Darkness is corrupting the Hegemony's worlds. Elle and a team of companions with enhanced abilities like her own embark on an interstellar quest to stop the advancing Darkness. The team's only clue is that fabled relics may hold the key to salvation.

With their worlds already destroyed, the only hope is a "universal reset" to undo the damage. However, as legends become fact and the lines between magic and science blur, Elle and her friends must unravel ancient secrets before their worlds and loved ones are lost in shadow forever.

The Dark Stars trilogy offers a unique blend of sci-fi and fantasy adventure with a sleek high-tech skin on traditional magic. With adventure, magic, and aliens, join Elle on her journey in a universe where second chances are real!